The Ideas Show, Taiwan’s biggest annual startup event, was founded by the Taiwan Institute for Information Industry (III). It provides tech startups with fundraising, networking and marketing opportunities by allowing them to demo their services. Each year, over 20 teams give demo pitch and exhibit their products and services. This year’s Ideas Show took place on July 22-23.

With over 7 years of history, the Ideas Show has grown from a local event to an international stage. In the past 2 years, it has drawn more and more international teams. As a result, more foreign startups have also started to expand their services to Taiwan. The Ideas Show set up a special panel discussion to investigate this trend.

This year, the Ideas Show invited a few international teams that have offices or representatives in Taiwan to get more information on what they see in the Taiwanese market. Nulab was honored to be invited. Our CEO Mr. Masanori Hashimoto (whom I shall refer to as Masa) travelled to Taiwan to share his opinion.

During Masa’s stay, I took him to visit 2 startup incubation/co-working centers. We also held our own event, Nulab Mixer #2: How to create a “good” team workshop.

We also visited the National Taiwan University Entrepreneur Association (NTUEA), an organization that provides a platform for National Taiwan University alumni to help current students who want to start their own businesses. NTUEA offers a co-working space and a series of startup- and entrepreneurship-related events. We checked out their co-working space (called NTU Garage) and met with some young yet talented teams. To our pleasant surprise, many of them were also Cacoo users! One team was the winner of TechNode Taiwan back in May, where Masa was a judge! We look forward to sharing our experience in NTUEA in the coming future.

We also visited the Taiwan Startup Stadium(TSS), a brand new startup cluster that launched in May 2015. They provide co-working space for Taiwan-based startups with both Taiwanese and international founders who are working to grow their businesses globally. TSS aims to bring more overseas exhibition opportunities for startups by providing events like Accelerator Bootcamps. Our good friend Holly welcomed us and introduced us to some of the staff and startup teams. Two of the teams pitched at the Ideas Show later that afternoon. 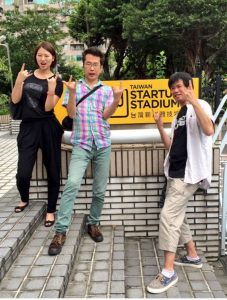 On Ideas Show Day 1, Masa and I visited some booths and listened to demo pitches. Each team had 6 minutes to pitch; this year there were 28 participating teams! We were lucky to witness some amazing startups. The top 3 winners of this year’s Ideas Show were Jumpy (smart watch for children), Fiiser (app search engine), and NextDrive (wireless expansion port).

As you can see, IOT is also a hot topic in Taiwan, especially since Taiwan is well-known for producing electronics and their components. We have many cutting edge technologies to product high-quality gadgets. 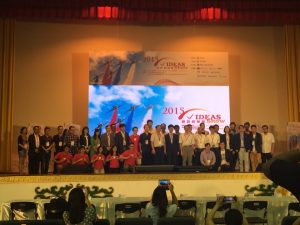 The second day of Ideas Show was filled with exciting experiences shared by entrepreneurs and corporations. Masa was among the five speakers in the international startup panel discussion. The host, David from Taiwan’s famous pre-incubation center iiiNNO, started by asking, “Why did your company want to set up an office in Taiwan? What do you see in Taiwan?”

Most speakers replied they saw a great opportunities in Taiwan, such its gaming industry is the fourth biggest market in the world. Also, Taiwanese users are more open to trying new technology and are more willing to pay. As for Nulab, we have many loyal users in Taiwan who are willing to promote our services to others. We like the atmosphere of Taiwan’s startup environment! In return, we want to help Taiwanese tech startups by sharing our experience and connections. 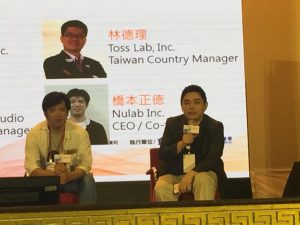 Another question from David was: “What does the Taiwanese startup environment lack?”

Many answered that it lacked an international presence. Many ordinary people are not familiar with Taiwan and don’t even know its existence. The regulations for foreigners to work or start business in Taiwan are not friendly either. If these could be improved, Taiwan would be a very competitive market.

Masa also suggested that Taiwan startups come to Fukuoka to try its services. Compared to Tokyo, Fukuoka has lower expense fees and great locations. Plus, it’s only a 2-hour flight from Taipei and other nearby countries, such as Korea and China. Many major companies, such as Line, are setting up local branch offices. Startups could stay in Fukuoka during the weekday and visit Tokyo to find investors. Nulab is willing to provide advice to Taiwan startups that are interested in setting up branches in Japan. Just give us a shout on Facebook!