On September 25, Mashup Awards 9 Caravan & Meetup conference was held at Iizuka city. Nulab participated in this conference as an API provider, and I personally pitched the Backlog and Cacoo APIs to participants.

Mashup – A collaboration style for developers and web services.

For those who are unfamiliar with what “Mashup” is, the term originated from the music scene where people create new songs by mixing two or more tracks together. In much the same way, application developers like us call an application hybrid of web applications a “Mashup”.

On the evening of the conference, three companies – KDDI Web Communications, NTT DOCOMO and Nulab, explained their services and APIs to attendees, providing them ideas and knowledge for developing their mashups. 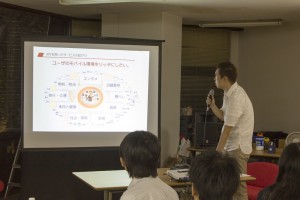 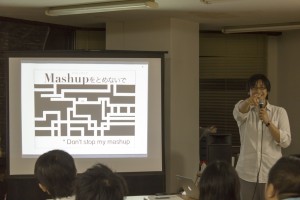 After the presentations, we held an Ideathon (Idea + Marathon) where attendees were divided into four teams, armed with only sketchbooks and pens (no computers), to discuss ideas for their new applications. Their ideas needed to be relevant to Iizuka city, as well as contain any APIs provided by the partner companies.

The team which took on the challenge to use Nulab’s APIs created a hazard map service application that makes telephone calls when a user is in a hazardous area mapped on a Cacoo diagram. It was an interesting and innovative idea which made use of Cacoo functions in an unconventional manner.

The team’s fantastic idea clinched them second place in the awards. I was glad for them, and delighted to have heard their idea. Mashup Awards is a major web application development contest in Japan, with many web companies participating to provide their APIs for the competition. Several awards are given out to the best mashup entries.

In Mashup Awards 9, Nulab is an API provider, providing both Backlog and Cacoo APIs. We will select the best application that incorporates either the Backlog or Cacoo API.

If you are interested in creating a mashup, you can find out more about Mashup Awards (Japanese only). We look forward to seeing your exciting creation!

Makoto Hirayama is a member of Nulab, the creators of Backlog, Cacoo, and Typetalk.