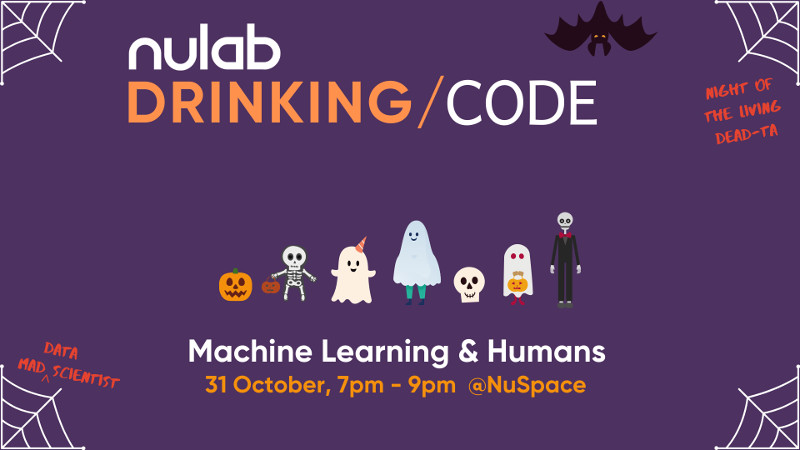 Sign up to become a NuSpace member and join our events in Singapore.

Night of the living dead-ta. Get it? 😉

In October, Nulab Drinking Code meetup in Singapore featured the theme of machine learning (ML), and since it was Halloween, we decided to spook things up at NuSpace with a meetup of data scientists.

Our two speakers were: 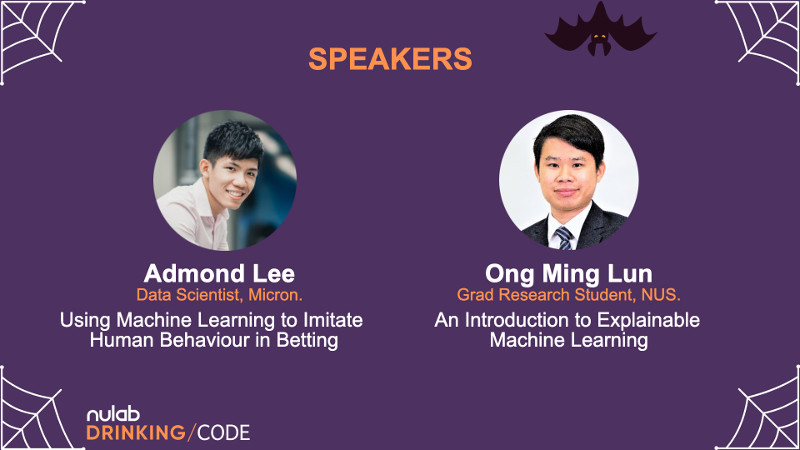 If you’re wondering why the title ‘Machine Learning & Humans’ for October’s meetup, it’s because both ML talks involved the human element — making ML models more understandable (for us, humans), and imitating human behavior in betting.

Before the talks, our attendees had a treat of snacks, pizza, and good ol’ witches’ brew (see pic below).

Some attendees might not recall what happened next after drinking that bitter, forgetful juice, so here’s a recap.

# An Introduction to Explainable Machine-Learning by Ong Ming Lun

Machine-learning (ML) models have become immensely popular over the last few years. However, due to their complexity, they are often regarded as black-boxes. In his talk, Ming Lun introduced concepts in explainable machine-learning and also gave a demo on an approach/tool to analyze ML models for improved explainability.

When it comes to soccer betting, is it a matter of luck, or getting the odds in your favor? In this talk, Admond shared his experience of building a machine-learning model using XGBoost to imitate bettors’ behavior and some of the interesting results to profit from betting based on intuitive model interpretability.

PS: being mindful not to encourage betting, we’ve abided with Admond’s wishes not to record the talk.

Admond is currently working on smart manufacturing/AI at Micron. He’s also a data science consultant, and writer with articles published in KDnuggets, AI Time Journal and Tech in Asia.

the data scientists and attendees chatted with each other and had more drinks and snacks.

If you are interested in the next Nulab Drinking Code Singapore meetup, come join us!