Once a year, we host a company-wide, week-long event at Nulab’s headquarters in Fukuoka, Japan. Nulabers from around the world fly, drive, and bus their way to Fukuoka to review the year’s progress, celebrate important wins, and align on the upcoming year’s goals.

This October, our US office hopped on a 15+ hour flight across the world to join in the festivities. Fellow Nulabers from Kyoto, Tokyo, Singapore, and Taiwan met us there.

The week kicked off with a hackathon style Dev Camp. Teams of developers came together to brainstorm innovative features and new product ideas. Groups worked together to bring the best ideas to life, present their creations, and vote on winners. Some team members were collaborating in-person for the first time! and that time spent face-to-face working on these projects plays a crucial role in deepening our bonds as a global team.

Some team members were collaborating in-person for the first time! As a company that regularly works collaboratively across countries and time-zones, working face-to-face on these projects plays a crucial role in bonding our global team for the year to come.

Our General Meeting consisted of all the things you might expect from a company-wide event: sales reports, forecasts, strategic charts and graphs, brainstorming sessions, status meetings, and of course a few inside jokes about our collaborative life at Nulab.

Getting everyone together in one room is a rarity at Nulab, but the physical proximity helps to reinforce our shared vision and strengthen our connections across cities and countries. Our general meeting is about more than getting us all on the same page; it’s about inspiring and exciting people about what’s to come. And there’s a lot to be excited about for Nulab in 2017.

After business was said and done, it was time to kick back and have some FUN. Our third annual Nulab Night brought together not only Nulab employees but also some of our most enthusiastic Nulab users for a night of drinks and performances from our talented team.

The night kicked off with a presentation about discovering and following your passions by members of the Fukuoka team. Life at Nulab in Japan includes weekly English lessons, and the presenters were proud to show off their acquired language skills by conducting the entire presentation in English in front of the entire company. They were especially proud to share it with the US office. Nulabers host a presentation about following your passions.

There was also a special performance by the magician Othello, who wowed the crowd with his mystical feats. A live band made up of Nulab developers—affectionately called Dirty Nu—ended the night playing songs by the Beatles and Oasis as the crowd sang along. Our US Web Designer, Siska Hines, even joined in as a special guest singing “Let it Be” for the group. Siska Hines sings “Let It Be” by the Beatles. 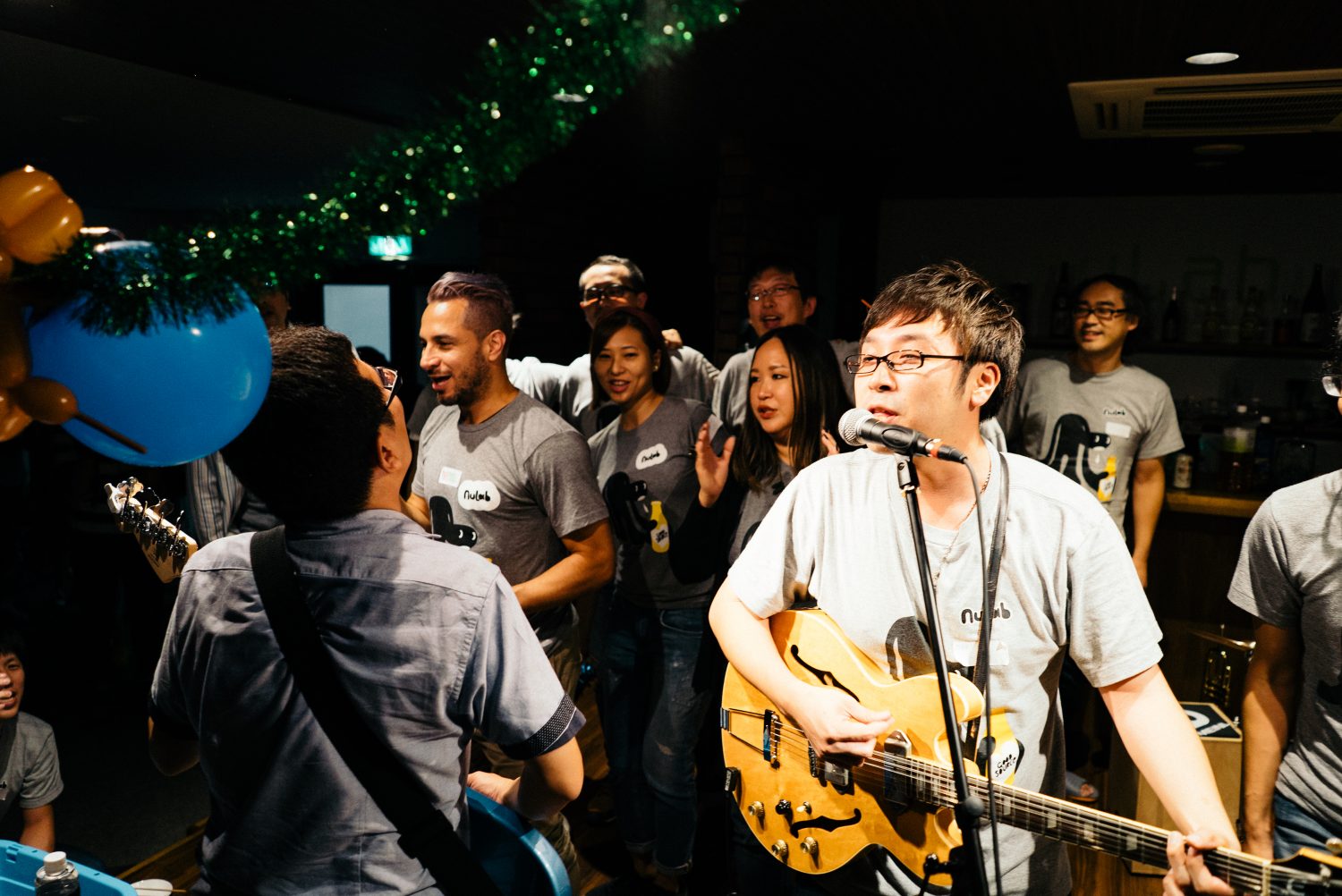 On the last day of events, a barbecue was hosted on a beautiful beach in Itoshima. Those brave enough to try it went out on the water using a fleet of rented stand-up paddleboards. Some were more successful than others at remaining standing, but all enjoyed the challenge. Others opted for a game of beach volleyball. For lunch, everyone enjoyed a BBQ of delicious food. This was the teams only moments away from the hustle and bustle of the city, and it was the perfect way to close out a week of hard work and play.

Our recruiting page has a saying that we use a lot, which is ‘’Work Hard, Play Harder.” This is a beloved phrase of our CEO, Hashimoto who believes that play is a crucial component of a successful and creative work life. While our week in Japan was filled with a lot of good work that is going to propel our company into a successful year, the most important part of our time in Japan was the fun with had getting to know our fellow Nulabers.

Our US team left on a high note, feeling incredibly lucky to have connected with so many passionate and talented Nulabers from across the globe.

Watch the video! To see more from our time in Japan, check out our annual meeting video below. To join our team and attend our next annual event for yourself, visit our careers page and appl!

Brandi Gratis is a member of Nulab, the creators of Backlog, Cacoo, and Typetalk.