On 4 February 2014, we saw our first public conference NUCON take off with overwhelming success. Over 300 people, which consisted of our app users as well as Nulab supporters and friends, gathered at Hulic Hall in Tokyo to participate in a total of 11 sessions of keynote and workshops. As the CEO of Nulab, I led the opening keynote session with some important announcements pertaining to recent developments and milestones at Nulab. Our project management tool, Backlog, now supports five languages in total with the recent addition of the Korean language and has over 200,000 registered accounts and 100,000 on-going projects. An iOS version of Backlog is also currently in development and can be expected sometime in March. Three months earlier, Cacoo, our online diagramming app hit a million users and has over four million sheets created. We also saw a growth in the percentage of Cacoo users outside of Japan, especially that in the USA, Taiwan, and Colombia. The official launch of our discussion tool, Typetalk, was also announced at NUCON. Typetalk’s product owner, Tsuyoshi Yoshizawa, shared on its development history up to its present out-of-Beta launch, along with a couple of product demonstrations. Did you know? Typetalk was inspired by the roundtable conversation style of World Café which encourages open conversation and participation. Perhaps the most exciting piece of news was the launch of Nulab Account, which was introduced to the curious crowd by Nulab’s CTO, Toshitaka Agata. With a Single Sign-on (SSO) service, users can access all our apps with just one password. No more repeated sign-ins and having to remember multiple passwords. Nulab Account would not only enable greater integration between Nulab applications but also provide our users greater ease and convenience in using our products. At a glance, the Technical Track hosted by the Nulab developer team covered the use of Cacoo, Backlog and Typetalk APIs for greater automation of daily work tasks, development techniques for growing and maintaining Cacoo, the move from traditional IT processes to DevOps with Nulab use cases, and architecture and design concepts for building applications with real-time functions.

The General Track featured guest speakers from Shanon, EVERRISE, Change Vision, Automattic, as well as Nulab’s own technology evangelist, covering topics including the utilization of Backlog for onsite and offshore developments, IMPACT MAPPING, scaling on remote collaboration in a distributed enterprise, and Nulab recipes for creating important applications for daily use.

The third track is a mini Git workshop with an introduction to Git version control by Backlog’s team leader. 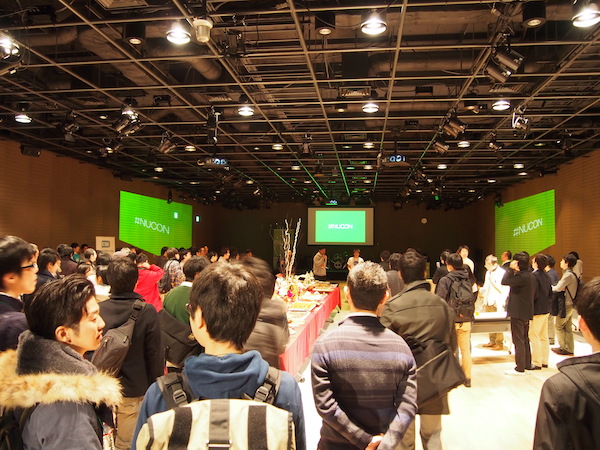 Who doesn’t love a party? It goes without saying that everyone at NUCON deserved one as the conference drew to a close. Nulab Night, the party that all Nulabers are obsessed about, went big at NUCON. A gastronomical buffet spread, geek donuts, clay sculpting, a magnificent sound system pumping the latest beats, dedicated photo corner with adorable mockup boards; you can say we had it all on Nulab Night. And of course, not forgetting the live performances put together by Nulab’s very own homegrown band, Dirty Nu, which also had Kenji Hiranabe, CEO of Change Vision, as a guest star on the guitar that night. At NUCON, the Nulab team also got to strut around in Nulab’s new original hoodie with illustration design done by Simon Oxley who is also the designer of the Twitter bird, Github’s Octocat, and several other famous mascots. Good Source indeed! Looking for more photos from NUCON in Tokyo? Check out our Facebook page!

Granted, all good things must come to an end, but there’s no harm in stretching them a little bit. We are bringing NUCON to Taipei and giving all our users, fans, and supporters there the opportunity to join us on 19 February 2014!

See you in Taipei!