The working world went through a massive adjustment in March of 2020, to put it mildly. Job loss was – and is – incredibly rampant, and those that did maintain paychecks were likely either essential workers or were switched to work remotely. The latter is ultimately the best-case scenario in a pandemic-laden world, yet it’s not always a completely seamless transition. So how exactly is the working world adjusting to working from home?

We spoke to 856 people working remotely due to the COVID-19 crisis. We discussed employee preparedness, how remote work differs from on-site hours, what the transition looked like – even how much it’s costing people. If you’d like a glimpse into how the world of remote work currently operates or how you can better prepare yourself for a similar type of future employment, you’ll want to keep reading.

The first snapshot our research took was one that showed the home office. We asked respondents which rooms and specific locations they worked in as well as which correlated with the highest self-reported productivity levels. 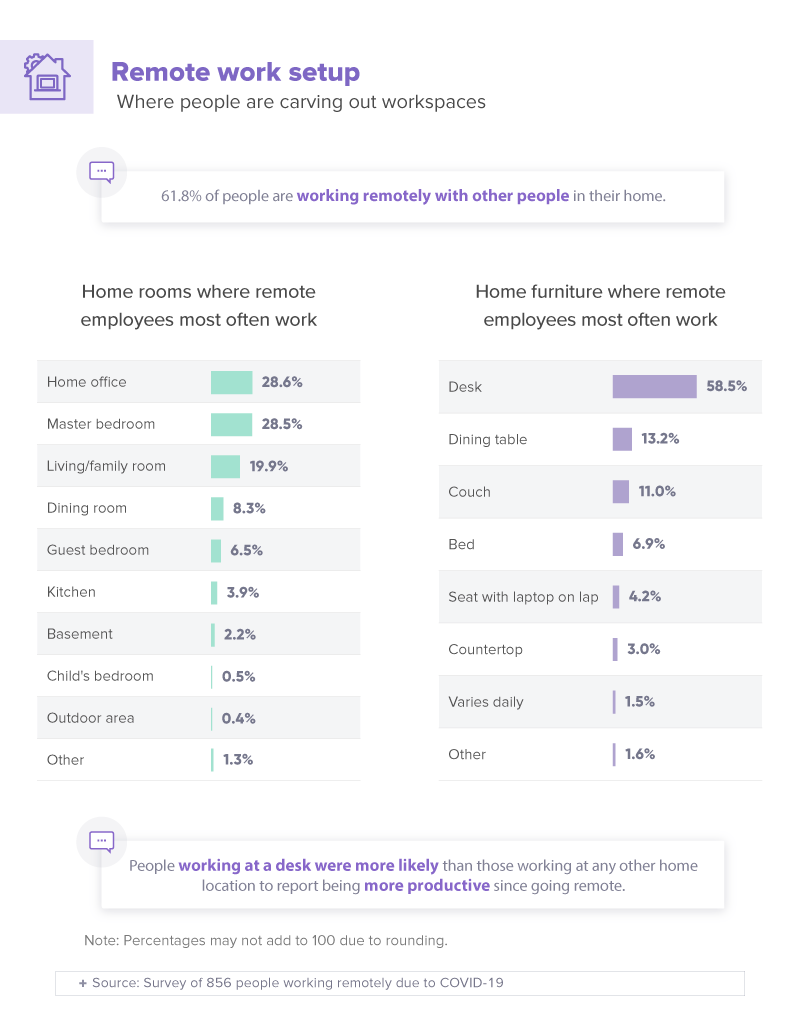 When participants created a remote workstation, they worked with what they had. Some were able to work remotely from an existing home office (28.6%), but it was almost equally as common for people to report working from their own bedroom (28.5%). Even though the bedroom is likely comfortable and appealing, most experts agree working there is not conducive to productivity. Instead, the desk proved a classic workspace for a reason. More than half – 58.5% – worked from a desk, but more importantly, desk-workers were more likely to be productive than those who reported working elsewhere. The dining table, couch, and bed did not measure up.

Tools of the trade

Preparedness was the next topic explored. Specifically, we asked respondents about the general level of preparedness they felt to transition their home to a makeshift office as well as the office supplies and items they needed or wanted. Even amidst the COVID-19 crisis, 72.3% said they were “completely prepared” to work remotely. Fortunately, 95% already had a computer, 85.6% had a strong internet connection, and 84.5% had their own headphones (the latter can be particularly important to maintaining sanity if working remotely with others in the home). Though things like in-home printers and scanners were rarer, the self-reported level of preparedness was over 50%.

Interestingly, it wasn’t the traditional office supplies that workers felt they were lacking. Perhaps the coronavirus has employees focusing more on health and wellness, as the items respondents most often wanted but didn’t have were things like standing desks (31.4%), back pillows (32.9%), and blue light glasses (26.6%). Standing desks are thought to improve everything from back pain to mood and even blood sugar. Finances have been a major concern and headline throughout the pandemic, so our study analyzed how remote work could be contributing to financial burdens as well. We asked remote workers how they obtained and financed the supplies they needed to continue working remotely.

Fifty-seven percent of respondents said that their employer would not allow them to bring work-related equipment home with them, excluding laptops and computers. Instead, 31.8% said they personally purchased necessary additional equipment. And for those whose employers didn’t allow employees to borrow equipment, they spent an extra $35 more, on average, than people who were allowed to take additional equipment home.

Though remote workers may be saving a little money on the commute, there were also costs associated with staying home. Just since March of 2020, employees reported spending an average of $194 on supplies specifically related to remote work. To put that into context, know that a desk alone can cost between $200 and $2,000. Our study took one final look at remote productivity. While studies have shown improvements to productivity when employees are remote, a global pandemic adds a new wrinkle to that. We asked participants to rate their own productivity as well as discuss some of the habits they’ve developed while away from the office.

Since these measures of productivity were self-reported, however, we also asked about specific behaviors that could have been related to productivity. When we asked if they were forgetting tasks more or less often, most said this was happening less or the same amount that it had been before they went remote, though 18.8% reported they were forgetting work tasks more since the pandemic struck.

The women we spoke to were more likely than men to feel less productive when working remotely. Considering that many COVID-19-related parental responsibilities (like homeschooling and day care) are often falling to women, there may be a greater barrier to productivity while working remotely for this gender.

Regardless of gender, respondents made an argument for an optimistic future involving remote work. More than half said they ultimately wanted to continue working remotely once normalcy returned. Many experienced heightened productivity and fewer mistakes. Though costs differed for some, overall preparedness was encouraging.

At Nulab, we understand the importance of a workspace that supports productivity and creativity, especially in times of uncertainty. That is why we gave a special stipend to our employees to help make their home offices work for them during this unprecedented time. Even if they already had what they needed, employees were encouraged to use the money for other things such as professional books, work lunches, or as extra savings during the pandemic.

If preparedness and productivity are values or concerns for you and your employees, you’re in the right place. We are the premier software expert that enables teams and especially remote workers to collaborate and communicate more effectively. We take care of the back-end technology that lets your employees enjoy seamless interfaces that ultimately help your bottom line. So head to Nulab today to learn how our experts can help you.

We surveyed 856 people who are currently working remotely due to the COVID-19 pandemic.

When asked how prepared they were, equipment-wise, to work remotely, respondents were given the following options:

In our final visualization of the data, we combined these options into the following groups: unprepared, neither unprepared nor prepared, and prepared.

The average amount of money spent by employees on remote work equipment was calculated based solely on those who had reported spending money. The average was calculated to exclude outliers. This was done by finding the initial average and standard deviation and multiplying the latter by three. The product of that calculation was then added to the initial average. Any data point above that sum was excluded.

Respondents were asked to report how productive they felt since working from home compared to when they worked on-site. They were given the following scale of options:

The data we are presenting rely on self-report. There are many issues with self-reported data. These issues include, but are not limited to, the following: selective memory, telescoping, attribution, and exaggeration.

Making the transition to remote work can be difficult for anyone at any time, but it can be particularly so during a global pandemic. If someone you know would benefit from the information in this project, you are free to share for any noncommercial reuse. Please link back here so people can view the entire report and its methodology. This also gives credit to our contributors, who make work like this possible.