As much as we’d all like to think high school cafeterias are far different from the offices we go to every day, at the root, they have a lot in common. A building full of a diverse group of people with different personalities coming together for a common goal applies to each scenario, and, given the variety, there is bound to be conflict. While the workplace relies heavily on teamwork and cohesiveness, dealing with co-workers is one of the most common obstacles.

Whether or not there is a larger issue under personality conflicts, staying silent and letting the problem continue can tear teams apart, cause great divides within the office, and ultimately cause productivity to plummet. How often are conflicts occurring between co-workers, what are the most common triggers, and how do employees work to solve them – if at all? We surveyed over 1,000 people to get their take on conflicts at work and how they impact nonwork hours. Keep reading to see what we found. 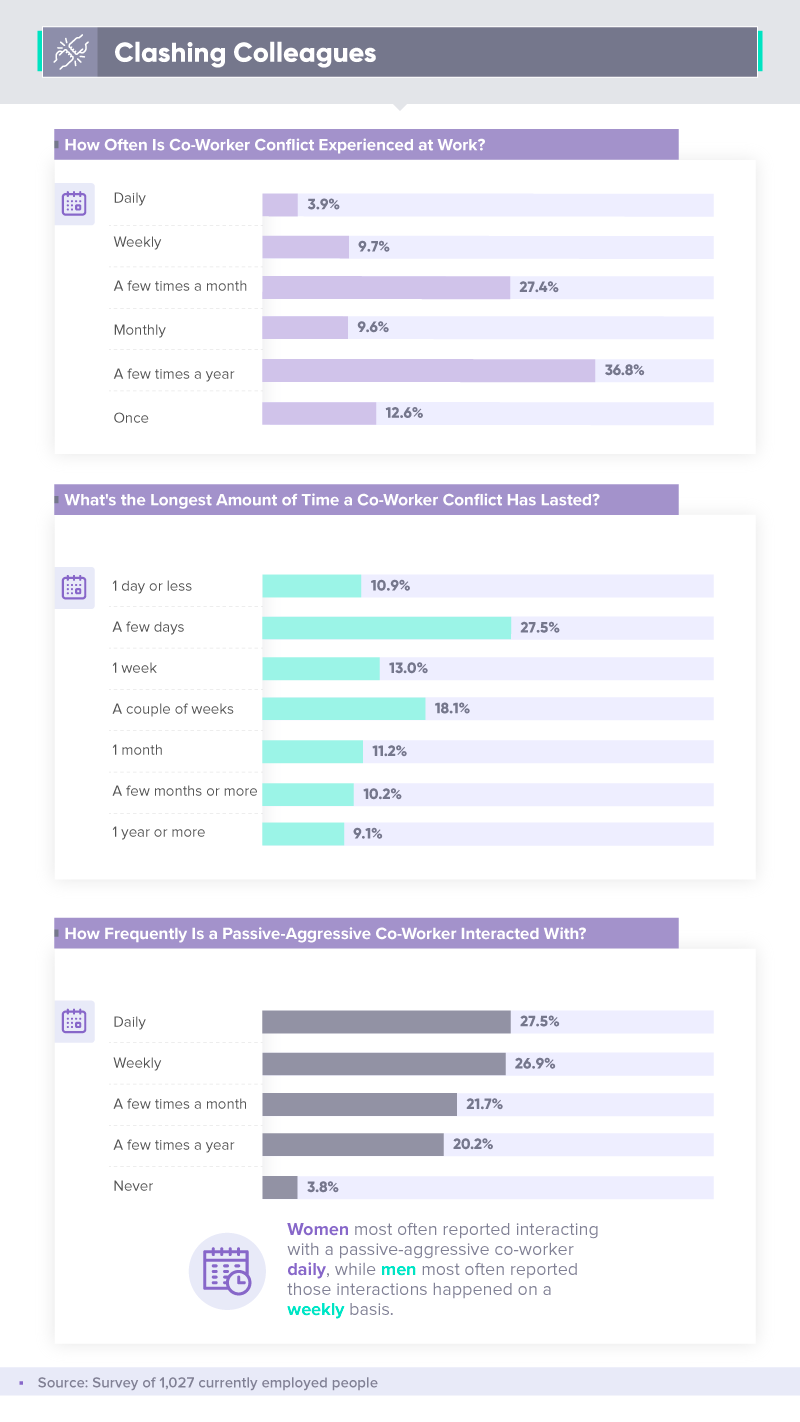 While finding work-life balance and managing workload are the greatest challenges employees face in the modern workplace, dealing with co-workers ranks in the top three. However, just under 4% of respondents reported experiencing co-worker conflict daily, and only 9.7% got into it weekly. Instead, nearly 37% said conflict occurred just a few times per year, and 27.4% reported conflict occurring a few times per month.

Despite passive-aggressiveness typically being subtle, there are clear signs that a co-worker is giving you the cold shoulder and attempting to make your work life a little harder. Considering 27.5% of respondents reported interacting with a passive-aggressive co-worker daily and 26.9% interacting with one weekly, watching out for specific signs is crucial to putting an end to the behavior. Aside from passive-aggressive behavior, there are plenty of ways to experience conflict in the workplace; women experience it two times more than men, unfortunately, and often by other women. 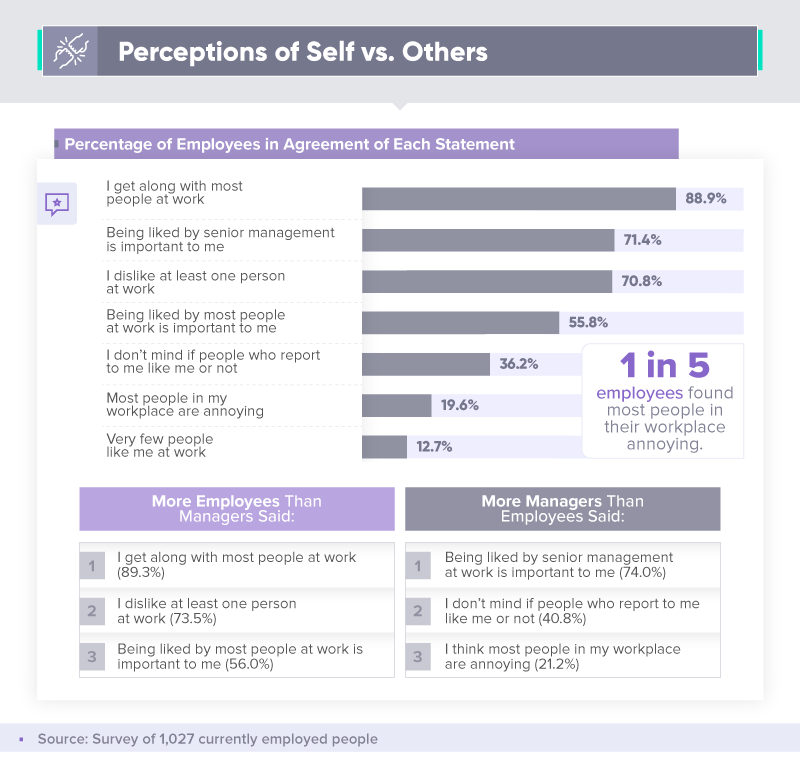 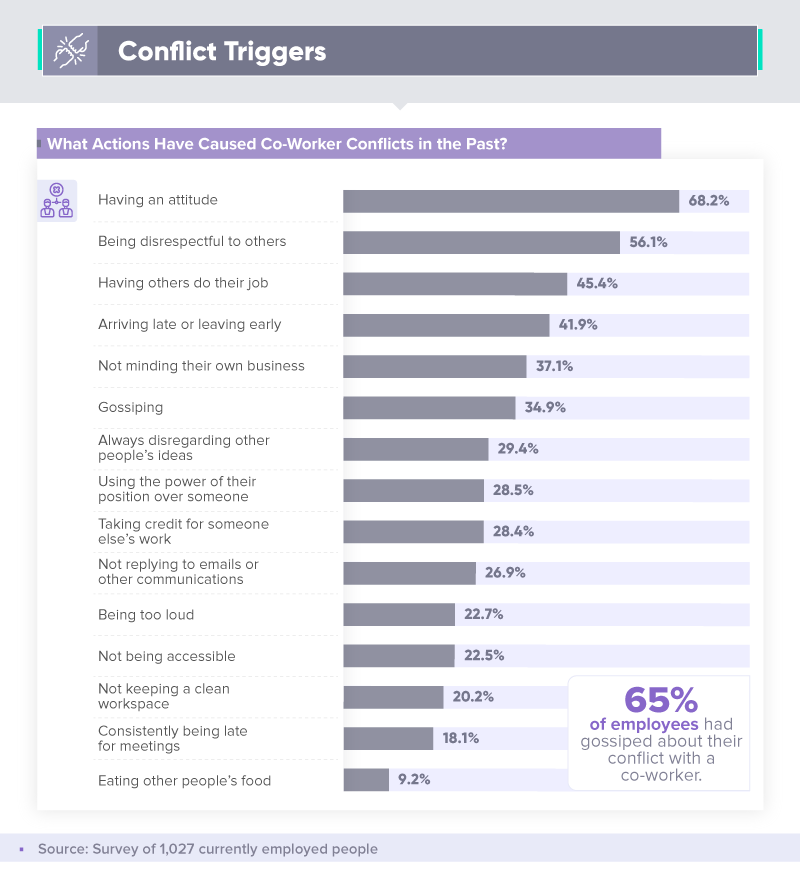 There are certain things you just shouldn’t do at work; when it comes to avoiding conflict, having an attitude and gossiping are major no-nos. Nearly 70% of respondents said a co-worker’s attitude was the cause of conflicts in the past, while 56.1% said they resulted from a co-worker being disrespectful to others. While what you say certainly plays a role in a conflict erupting, how you say it may play a larger role. There is a way to be respectful in the workplace, even if the conversation is more negatively toned.

While gossip is negative talk that largely occurs behind-the-scenes, it can still have detrimental effects on both co-worker relationships and the office environment. Despite 65% of employees reporting that they gossiped about their conflict with a co-worker, 35% named gossip as the root of past conflicts. Of course, acting against moral standards or things we look down upon isn’t unheard of. There are plenty of reasons behind hypocrisy, but the most obvious is self-interest. 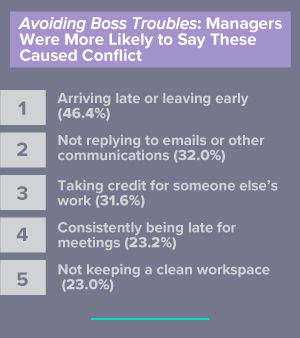 Employees may be more apt to argue over picking up a co-worker’s slack and being outright disrespectful, but conflict involving managers had a more work-related root. Compared to employees, managers were more likely to say arriving late or leaving early, not replying to emails, and taking credit for someone else’s work were the main sources of previous conflicts. The difference is, however, that managers are in a position of power – especially when the conflict is between a superior and subordinate, or two subordinates – and are typically expected to work toward resolving the conflict. 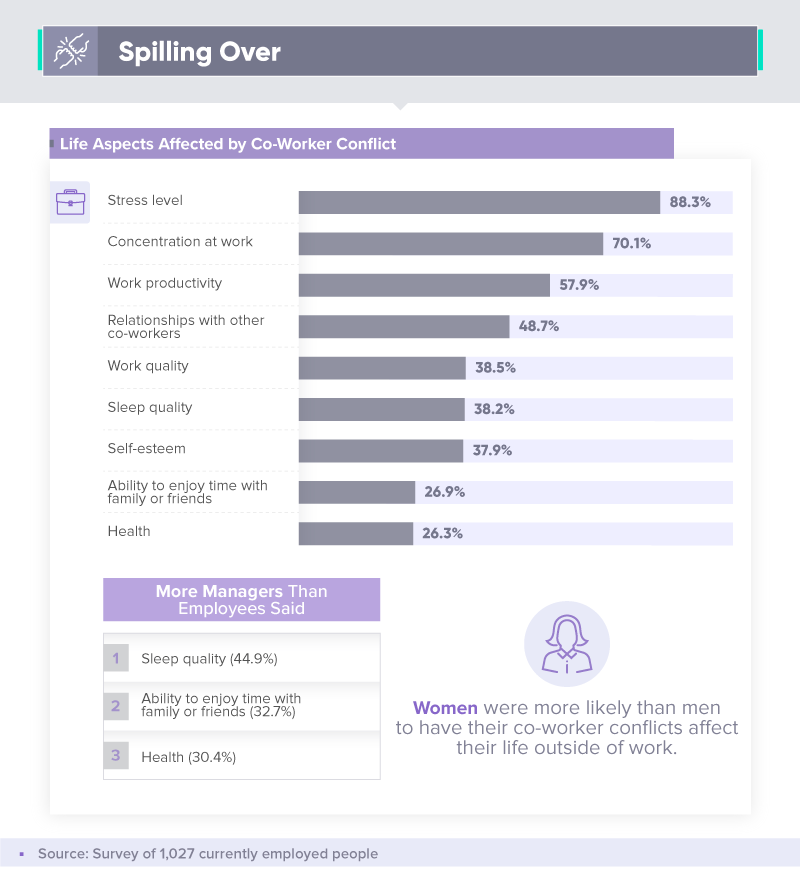 Work-life balance may be an increasing concern in the workforce (largely thanks to millennials), but when conflict breaks out at work, it can be incredibly difficult to leave the emotional toll in the office. Eighty-eight percent of respondents said co-worker conflicts most impacted their stress levels, while 70.1% said they impacted their concentration at work. And while productivity and engagement are linked to co-worker relationships, conflict negatively impacted both – nearly 58% of respondents said co-worker conflict affected their work productivity, while 48.7% said it impacted their relationships with other co-workers.

Can’t get no satisfaction 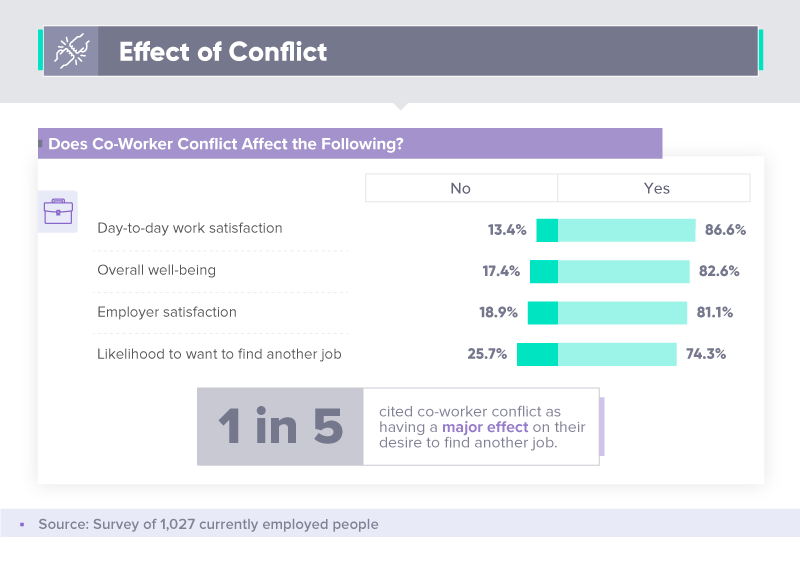 Employee satisfaction has significantly decreased over the past two decades, and while numerous factors contribute to employee happiness, conflict seems to be a major one. Just under 87% of respondents said co-worker conflict affected their day-to-day work satisfaction, while 81.1% said it impacted their employer satisfaction. Considering satisfaction is so low, it makes sense that one-third of Americans considered quitting their job over just a three-month period. And while a majority of Americans thinking about quitting did so due to other factors of low job satisfaction, 1 in 5 respondents said co-worker conflict had a major effect on their likelihood to want to find another job. 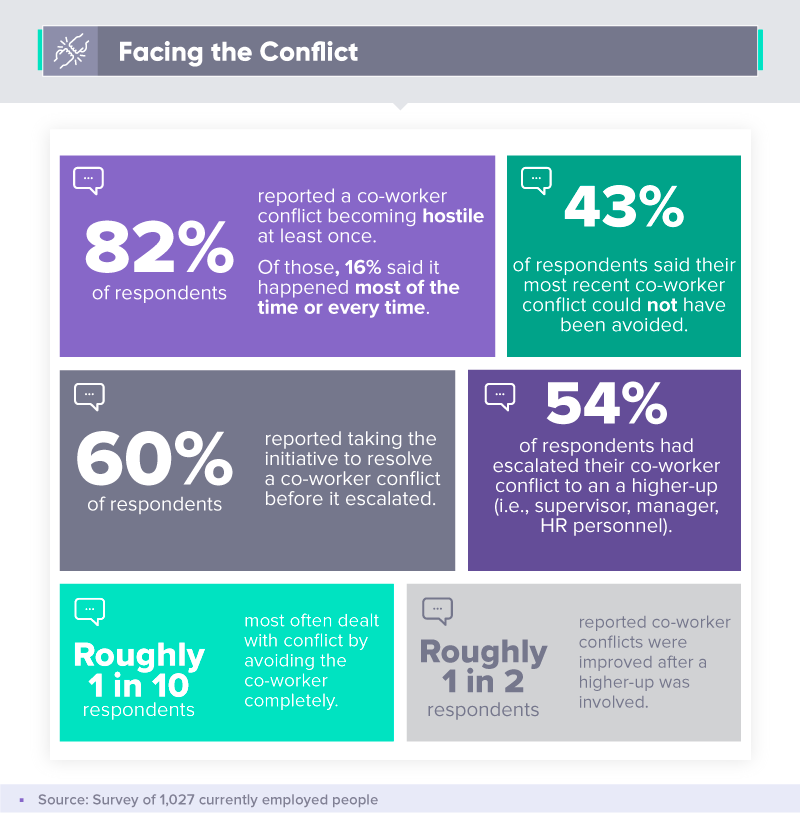 Conflict resolution in the workplace isn’t always straightforward – the approach depends on the type of conflict, the co-workers it involves, and the person intervening, but there are ways to minimize and resolve conflict in a healthy manner. While some conflicts can’t be avoided, a dilemma 43% of respondents experienced, 60% of employees reported taking the initiative to resolve a co-worker conflict before it escalated. Nevertheless, a whopping 82% of employees said their conflict with a co-worker became hostile at least once.

Given the difficulty of confrontation, avoiding a co-worker involved in the conflict is an easy route – one that roughly 1 in 10 respondents took – but avoidance never truly leads to resolution. Instead, 54% of employees escalated their conflict to a superior, which ended up making the situation better for roughly half of the people surveyed. 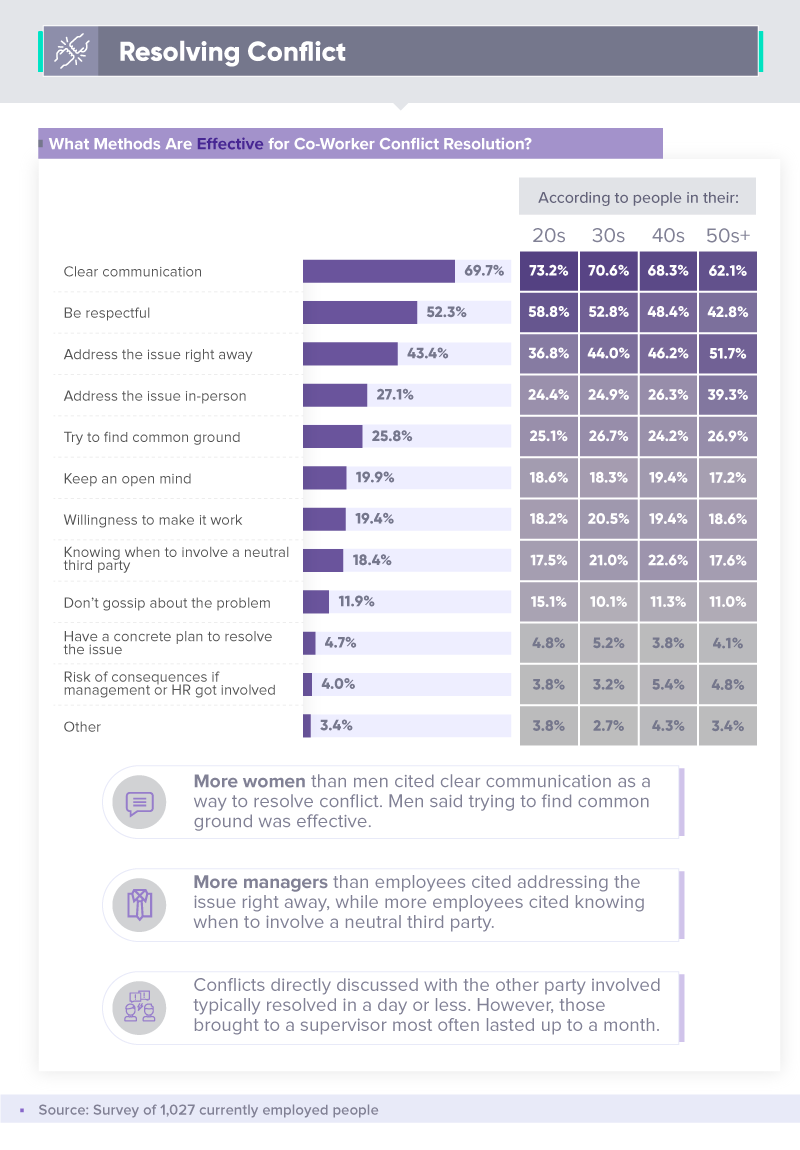 Pushing past the discomfort of confrontation and working toward a resolution is the best way to bring the office back to a healthy environment, but what methods have employees found to be the most effective? Clear communication was by far the most effective method, according to nearly 70% of respondents. Being respectful and addressing the issue right away were also ranked as effective by 52.3% and 43.4% of respondents, respectively.

While conflicts directly discussed with the other involved party typically resolved in a day or less, those most often brought to a superior lasted a month. And despite most people wanting speedy conflict resolution, experts say some workplace conflicts can be healthy. Simply redirecting the energy can turn conflict into a boost in innovation, trust, and engagement.

In an office full of different people with different personalities from different backgrounds, conflict is bound to arise. Whether it’s an attitude from a co-worker or tardiness and messiness from an inferior, knowing how to resolve conflict and resume the role of smooth collaboration is imperative in all industries. Communicating clearly and respectfully seems to be the most effective route to take, while discussing the conflict directly with the other party involved is the fastest.

Conflict may be a normal part of teamwork, but resolving it quickly can help get the team back on track and productivity increased once again. Employees who get along may make for a good team, but without the proper software to enhance their collaboration, their productivity could suffer. At Nulab, our goal is to make collaboration as easy and productive as possible, so we’ve created software to help. From project management and real-time collaboration to clear communication and file sharing, we have the software that your team needs to succeed. To learn more, visit us online today.

The data used in this study were curated via a survey using the Amazon Mechanical Turk platform. To qualify to take the survey, participants had to be currently employed and have experienced conflict with a co-worker at least once. There were a total of 1,027 participants. The distribution of participants are as follows:

For the graphic titled, “Perceptions of Self vs. Others,” participants were asked how strongly they agreed or disagreed with the statements on the list. They were given a scale of 1 to 5, with 1 being “Completely Disagree” and 5 being “Completely Agree.” The percentage calculated in this graphic is a combination of 4 (“Agree”) and 5 (“Completely Agree”).

For the graphic titled, “Effect of Conflict,” participants were asked to select the effect on a scale of “No effect” to “Major effect.” The portion of the bar titled “Yes” is a combination of “Minor effect,” “Moderate effect,” and “Major effect.”

For the graphic titled, “Resolving Conflict,” participants were asked to select exactly three items on a given list that they thought to be the most effective methods for conflict resolution.

This study was purely exploratory and meant to give insight into the current state of conflict management in work environments. As the data rely on self-reported information, this can introduce issues such as exaggeration and selective memory. Future research could further explore the nuances of co-worker conflict as it pertains to different facets, such as personality types, work styles, or job levels.

Conflict is inevitable between personality-clashing co-workers, but there’s no disagreement here – we grant you permission to share the graphics and content of this study for noncommercial purposes. Just don’t forget to link back to this page so the authors receive proper credit.