No matter which industry you work in, you can probably find any number of “expert” opinions on getting promoted. Recommendations include putting office politics aside, buffing up your marketable skill set, and dressing for the job you want, not the job you have.

Of course, any advice worth considering will at least mention leadership. Owning key projects, seeking a more left-to-right view of the business, and pushing new goals are a few ways you can demonstrate leadership potential when seeking a new role.

What does the path to leadership really look like, and is it the same regardless of age or gender? To help answer these questions, we surveyed over 1,000 current managers about their perceptions of workplace growth. Read on as we explore whether leadership is perceived as a skill or trait, what a promotion journey can look like, and what people believe most contributes to their success. 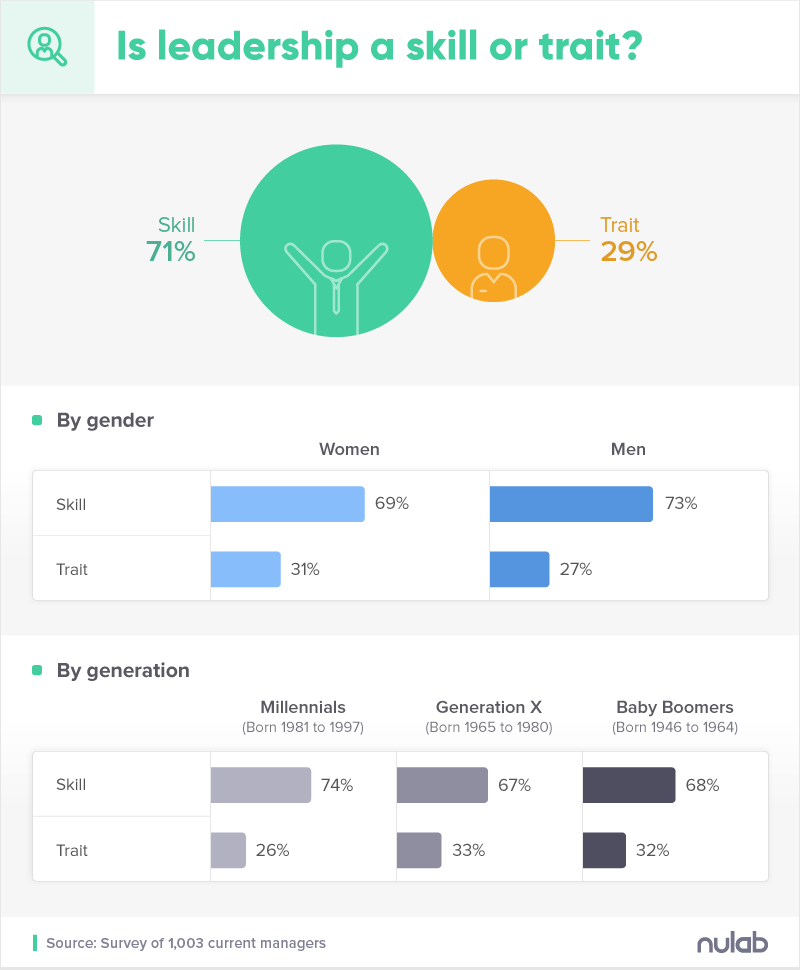 If you need to adapt and apply leadership qualities to your existing role to elevate in rank, it begs the question: Can leadership be taught, or is it something we showcase inherently? So, what does the coveted, sometimes elusive, path to leadership look like? For more than half of people, a promotion was offered (59%) rather than pursued (41%). While those promoted internally had been with their existing company three years, on average, before moving up, women (58%) were slightly less likely than men (60%) to say they were offered a new role.

The path to promotion may not come quickly, but it could be the most reliable way forward. Compared to 37% of professionals who were hired directly into leadership or management roles, 63% were promoted internally. When evaluated by generation, baby boomers and Gen Xers (41% each) were more likely than millennials (34%) to be hired directly into a leadership position rather than working their way up.

Sure, a new title is nice (and it can help boost your authority and perception internally and externally), but the real perk of obtaining a leadership position may relate to dollars and cents.

Roughly 4 in 5 professionals elevated to leadership roles from within their company also received a raise, although some had to ask for it. Compared to 14% of Gen Xers, 20% of millennials had to ask for a raise when promoted. However, raises that were offered were more lucrative, averaging over $8,700 compared to around $7,400 among those who had to ask.

Generation may not only play a part in the compensation gap for leadership roles. While men promoted internally were given raises averaging over $9,000, women reported receiving nearly $1,200 less. 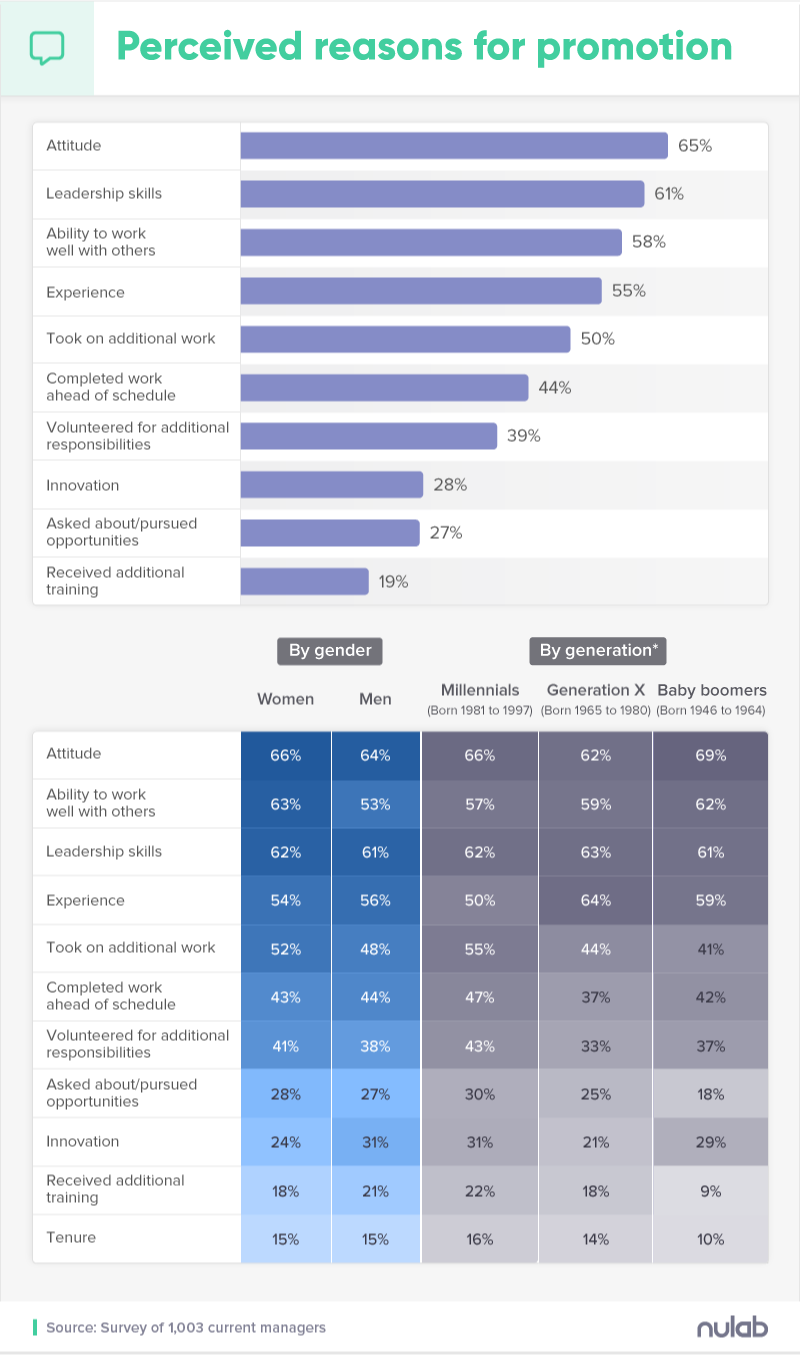 Among the top reasons attributed to a leadership promotion were attitude (65%), leadership skills (61%), and the ability to work well with others (58%). Just 27% of respondents indicated they got their current role because they asked for it, and even fewer signaled that their success was a result of receiving the right training (19%). 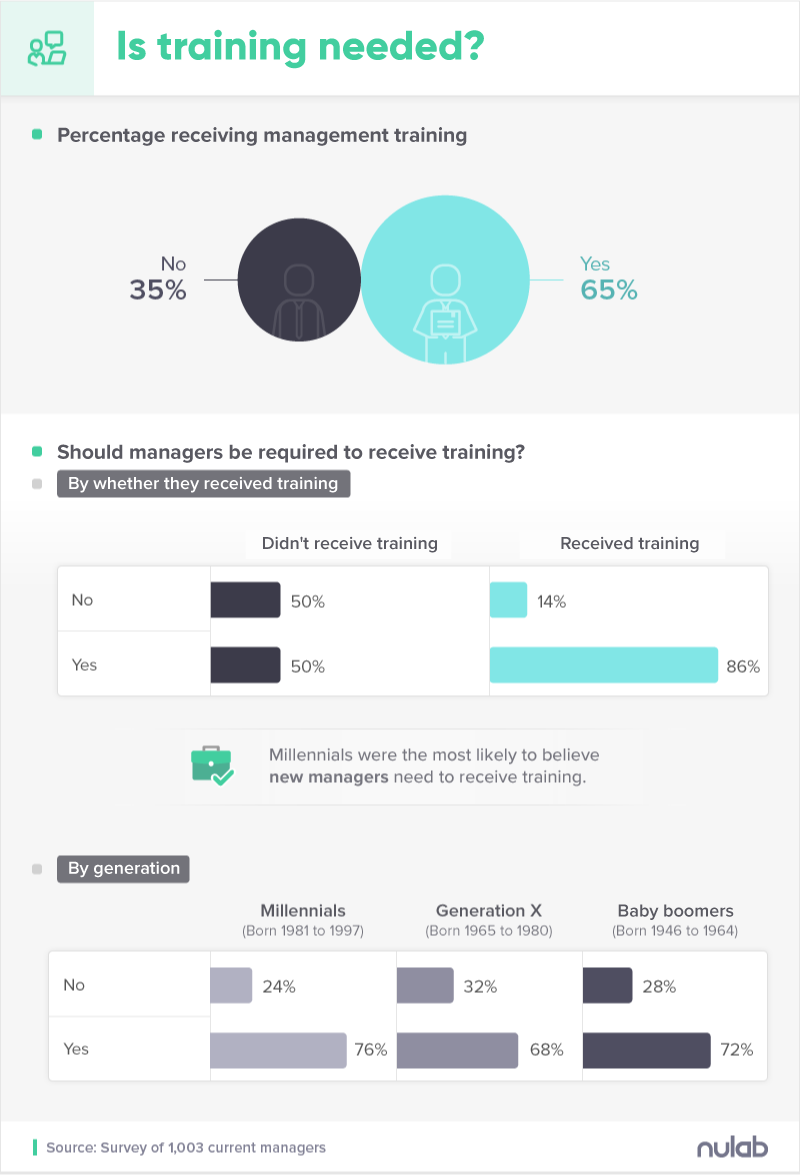 Regardless of whether they saw it as valuable, 65% of professionals in leadership roles received management training, lasting nearly six months, on average. More than 4 in 5 respondents who had been through training believed managers should be required to go through training. Interestingly, millennials had the most favorable opinion (76%) of management training than any other generation.

For a majority of professionals, the path to leadership isn’t always clear. There’s no blueprint to follow, and your experience can vary depending on your industry and even your gender and age. It’s important to recognize that no two work journeys are the same, and sometimes, you have to ask for what you want rather than waiting for it to be handed to you.

At Nulab, we may not have the secret sauce for your next promotion, but we want to make sure you and your team have the tools you need to succeed along the way. With our product, Backlog, you’ll find everything you need for a seamless workflow, including internal wikis, task management, file sharing, and project boards to visualize progress, you’ll be able to boost collaboration and ensure transparency. Learn more about our project and code management tool at Nulab.com today.

For this study, we surveyed workers who identified as managers, supervisors, directors, or executive management. We were able to reach 1,003 people using Amazon Mechanical Turk. For analyzing raise amounts, as well as years in management, we set the minimum value to 1 and the max value to be the 95th percentile for each of these values.

The average age of our respondents was 38.3 with a standard deviation of 11.3. The generation breakdown was as follows:

There were 479 women in our survey sample, 520 men, and four people who did not identify as male or female.

All of the information in this survey is self-reported. Because of that, there are certain limitations to the data, such as exaggeration or underreporting.

Want to help prepare your readers for future success? Share these insights about the path to leadership for any noncommercial use with just one stipulation: a link back to this page as a credit to our contributors for compiling this data.