There is no denying that the U.S. economy is booming – the rate of people seeking unemployment benefits has dropped to its lowest since 1969, and there are more job openings than people looking for work. But while a decrease in unemployment is an overall positive experience, there are downsides. For example, finding qualified employees for available positions has become increasingly difficult. However, more job openings could also be a sign that businesses are expanding exponentially.

Are companies simply getting bigger, or are startups continuously sprouting and sticking around? We collected data from the U.S. Bureau of Labor Statistics’ Establishment Age and Survival report to see how long businesses typically operate, which industries close the fastest, and where businesses are expanding. Keep reading to see what we found.

Survival of the fittest 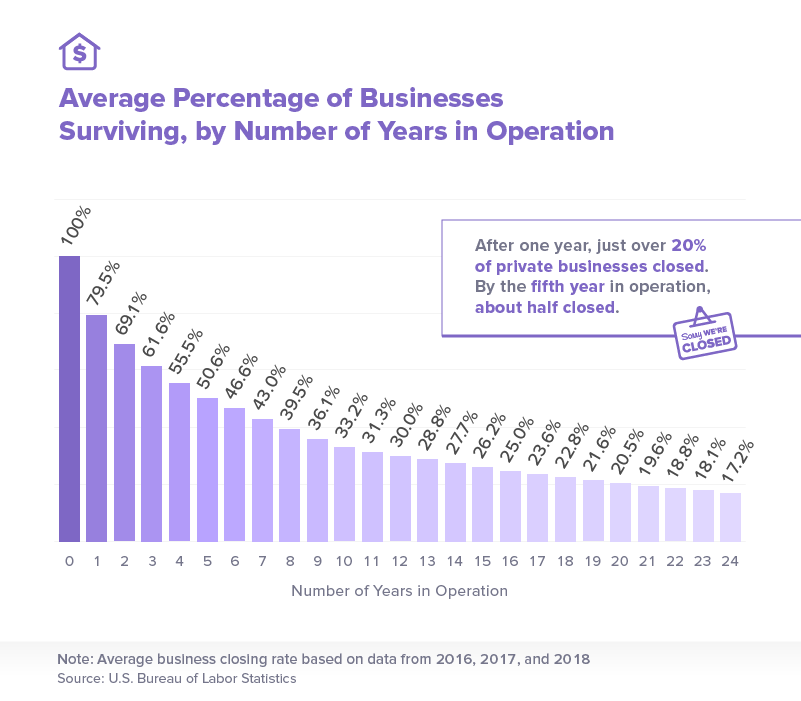 The world of business is a risky one, and no matter how qualified or prepared someone is, there is no guarantee of immediate or lasting success. In fact, only 80% of private businesses will remain in operation after the first year. The number of businesses open will steadily dwindle from there, with only about half remaining by the fifth year. And by year 20, a little over 20% of businesses will still operate, ultimately reaching a low of 17.2% by the 24th year.

While a lack of experience and issues bringing in capital are sure to bring down a business, they are not the only reasons that startups fail. For some businesses, there simply might not be a market for what is offered. Customers are the foundation to success for small businesses, and if they don’t need or want the product being sold, the business can be at risk of closing. Additionally, competition, pricing, and not having the right team can cause a new business to fail. It may also just be a case of bad luck. 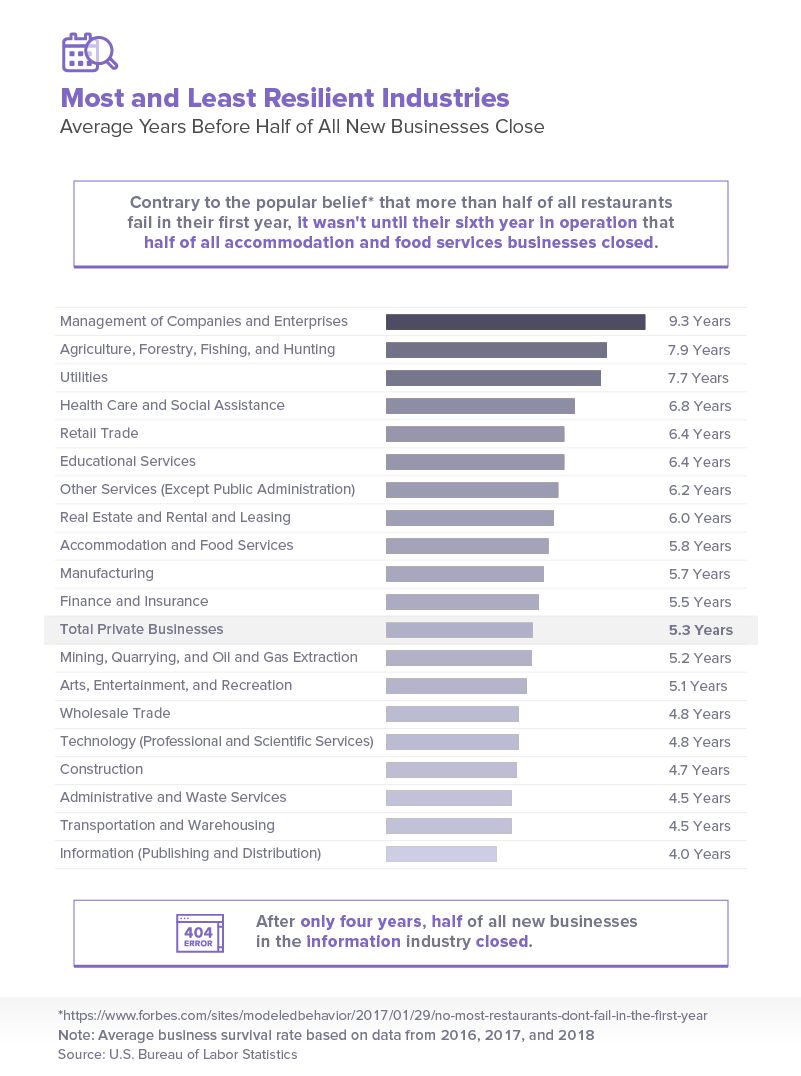 Half of all businesses may close around five years, but certain industries are significantly more resilient than others. The management of companies and enterprises industry was, by far, the most resilient, with 9.3 years passing before half of its new businesses closed. The agriculture, forestry, fishing, and hunting industry, along with utilities, also had some of the longest life spans, with half of the new businesses closing after 7.9 and 7.7 years, respectively.

Despite the claim that most restaurants close their doors in the first year of business, it wasn’t until the sixth year that half of all new businesses in the accommodation and food services industry closed, according to BLS data. On the other hand, half of the businesses in the technology and construction industry closed after just 4.8 and 4.7 years, respectively – despite both industries ranking in the top 10 industries with the most growth and profit.

The least resilient industry, however, was information, with half of all information businesses closing after four years in operation. While the information industry covers a wide array of fields, the shift to online platforms may hurt new businesses, with media companies feeling the backlash of the internet and the free content it brings.

Getting a head start

While people may be moving to Florida and California because business is booming and wages are rising, entrepreneurs may not fare as well in Florida. The Sunshine State ranked just above the national average, with 79% of new businesses surviving the first year, on average. On the other side of the country, however, 81.3% of new businesses in California made it past a year, making it the second-best state for a starting chance. The only state with better odds was Massachusetts, where an average of 82.4% of businesses survived. However, while California has a slightly lower percentage of survival, over 100,000 new businesses remained open between 2016 and 2018 – that’s over six times more businesses than Massachusetts.

New businesses in North Dakota, Rhode Island, and Georgia faced the greatest chance of failing, with each state having around a 76% chance of survival. However, each of these states has a substantial amount of startups. Between 2010 and 2015, North Dakota saw a spike in small business startups, while the most recent peak in Rhode Island and Georgia occurred in 2015. However, along with many businesses opening comes an increase in the number of companies ceasing operation.

Location may play a major role in determining a business’s success, but factors like talent, work ethic, sales, and even local laws and regulations can turn a good business idea into a closed shop. Learning how to navigate around obstacles and make proper use of resources can help any business survive – regardless of where it’s started. 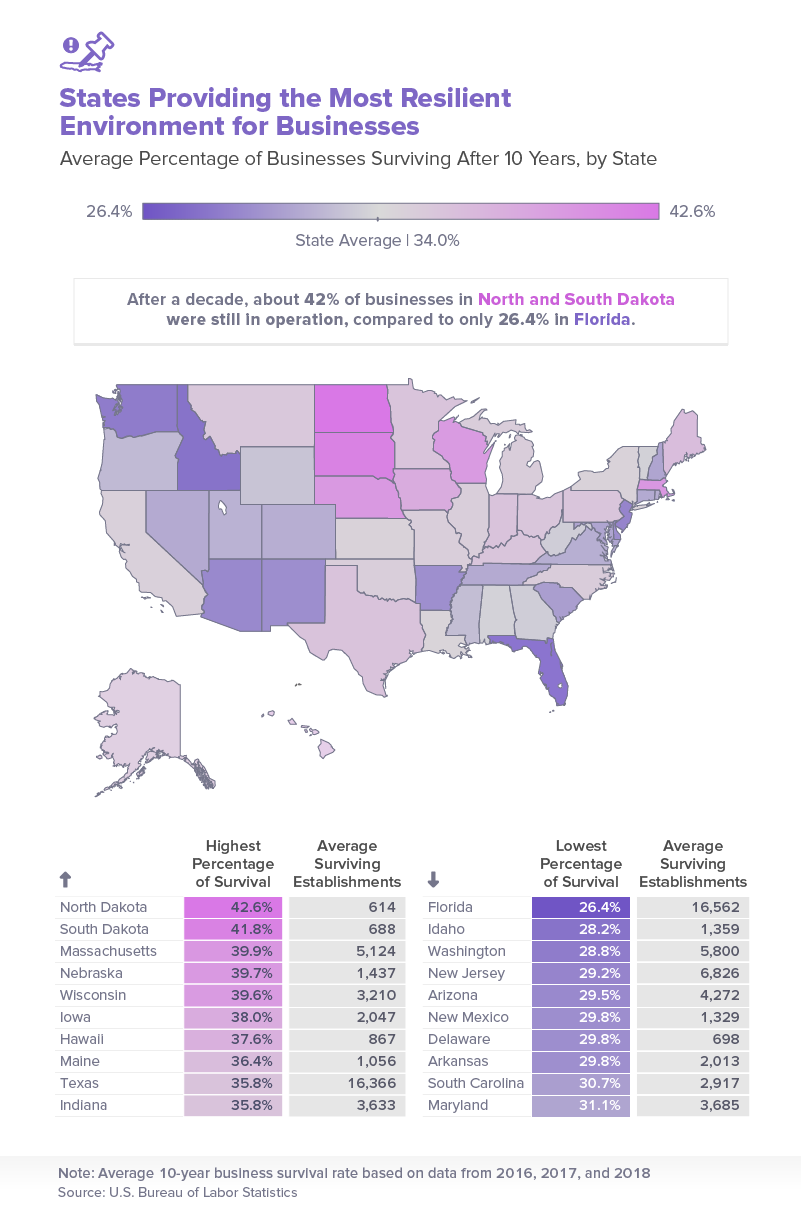 On the other hand, Florida had the worst survival rate, with just 26.4% of businesses making it past a decade. The state’s ranking may not be a reflection of the economy, though. Rather, Florida’s susceptibility to hurricanes often forces businesses to close their doors permanently. Considering the majority of Florida’s population (and businesses) resides on the coasts, damage from natural disasters may prevent businesses from making it past the 10-year mark.

Considering half of all businesses shut down by the time five years roll around, most would expect longevity to be a sign of success. Massachusetts was one of the states with the most stable timelines – the state ranked first for business survival after one year and five years, and only dropped down to third by the 10th year. Vermont’s business survival rate also remained pretty steady, ranking 24th by the first year and just 27th by year 10.

However, Ohio, Utah, Alaska, Pennsylvania, and Nebraska were just a few states with more drastic changes over the years. While the states may have ranked high or low in their first year, survival rates typically assumed the opposite by five or 10 years. One thing is for sure, though: First-year survival rates are not accurate predictors of overall business longevity.

North Dakota’s recent oil boom may explain the state’s extreme trajectory from having the worst first-year survival rate to the best 10-year rate. At its peak, the state boasted the lowest unemployment rate in the country. In 2014, the economy experienced a lull when oil prices collapsed, causing small towns and businesses to suffer. However, oil production has since ramped up.

The closing and expansion rate of businesses remained slightly steadier over their time in operation. The first year saw the greatest number of closures, but by the second year, businesses saw the highest expansion, with just under a third growing their business. Another jump in expansion occurred after the 15th year of operation and remained elevated for at least the next 10 years. 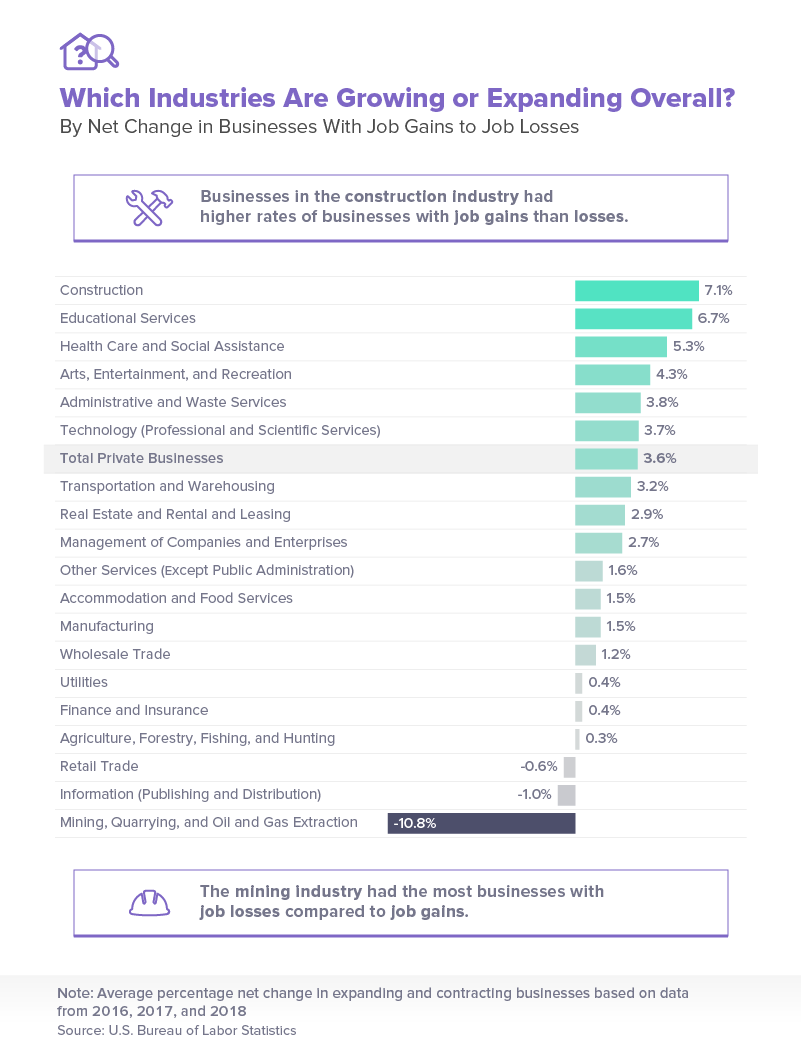 The U.S. has been on a record-long job growth streak, reaching over 100 consecutive months of increasing jobs. While this is a sign of a thriving economy, certain industries aren’t seeing the same growth as others. It’s likely no surprise that the technology industry is one of the fastest growing; however, in terms of job gains compared to losses, the construction industry topped the chart. Compared to 3.7 percent of businesses experiencing growth in the technology industry, 7.1% of businesses in the construction sector had more gains than losses. 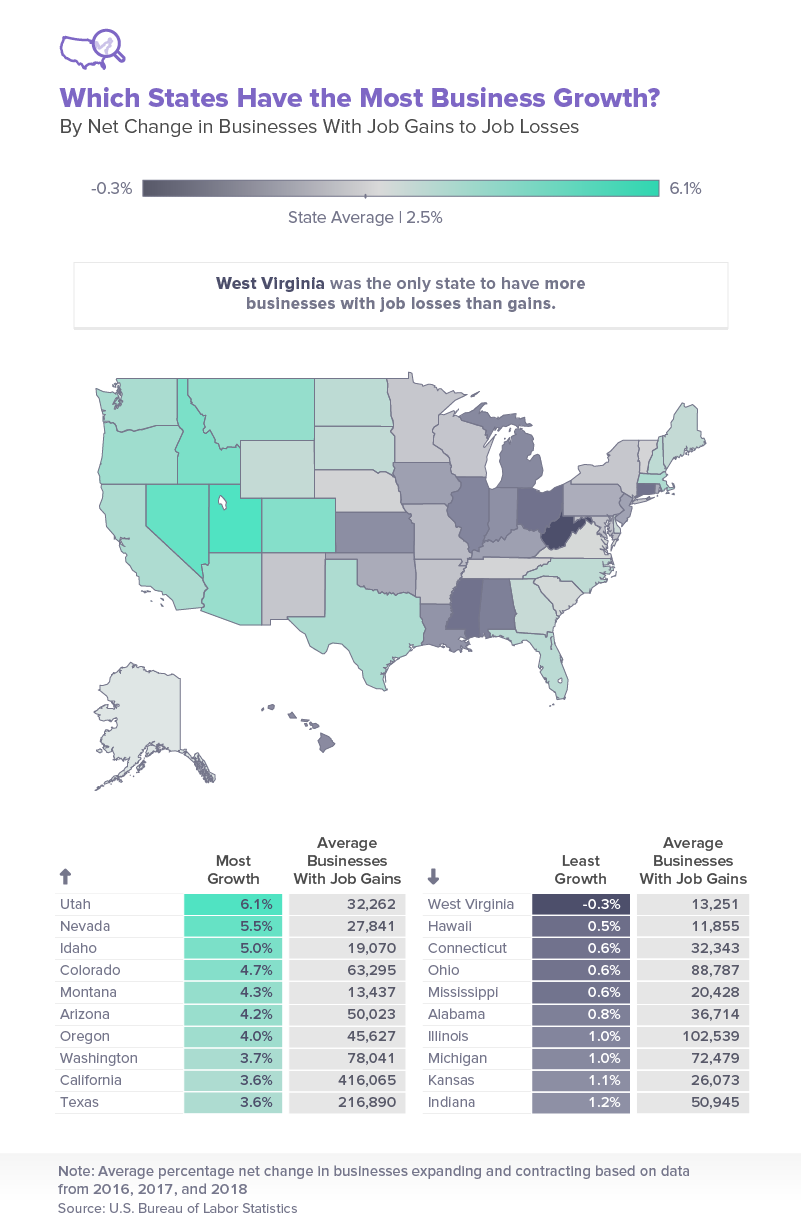 Just as industries vary in expansion and contraction, so too do states. Utah had the most growth with 6.1% more gains than losses. The state’s job growth, high labor force participation, and low unemployment rate earned it the top spot for employment. Nevada followed closely behind Utah with 5.5% more businesses growing than closing. However, California and Texas had significantly more businesses with job gains overall, despite a lower percentage than Utah and Nevada – even with just 3.6 percent of businesses seeing growth, California and Texas had an average of 416,065 and 216,890 businesses experiencing job gains, respectively.

While plenty of states had significantly less growth, only one state had more losses than gains – 0.3% more businesses contracted than grew in West Virginia. This decline in West Virginia’s businesses is likely related to its decreasing population and growing poverty rate. In 2018, the Mountain State lost over 11,000 residents, while its poverty rate increased from 17.9% to 19.1% in just a year.

Numerous factors determine the survival of a business. Surviving the first year is only accomplished by 80% of businesses, and by the fifth year, half are no longer operating. But making it to the fifth year isn’t necessarily a sign of strength. By the 10th year in operation, some businesses are still forced to close their doors, especially in Florida.

Opening a business is clearly risky, so knowing which states and industries are the most resilient is vital to making the right move. But picking the location and type of business is only one part of the equation. Forming a qualified, cohesive team to back your business and provide employees with the proper tools can increase the chances of your business surviving. At Nulab, we are dedicated to providing businesses with the best software to facilitate efficient teamwork. To learn more about products that can help your team run smoothly, visit us online today.

Data are limited to private businesses.

Luck may play a part in successful businesses, but being informed about the risks is the best way to increase the chance of survival. If you know someone who could benefit from the findings of our study, feel free to share it with them. The graphics and content of this project are available for noncommercial reuse. Just make sure to link back to this page to give the authors proper credit. 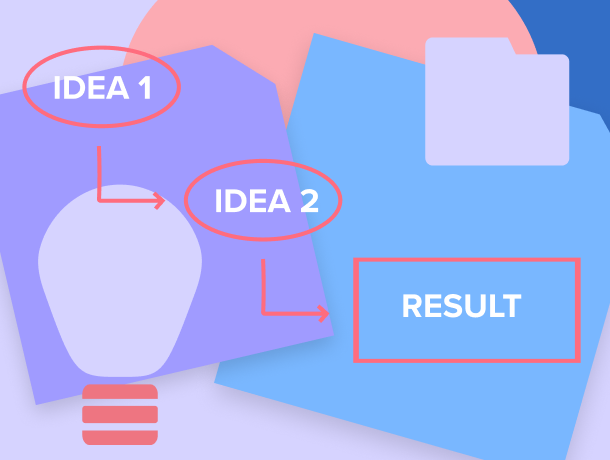 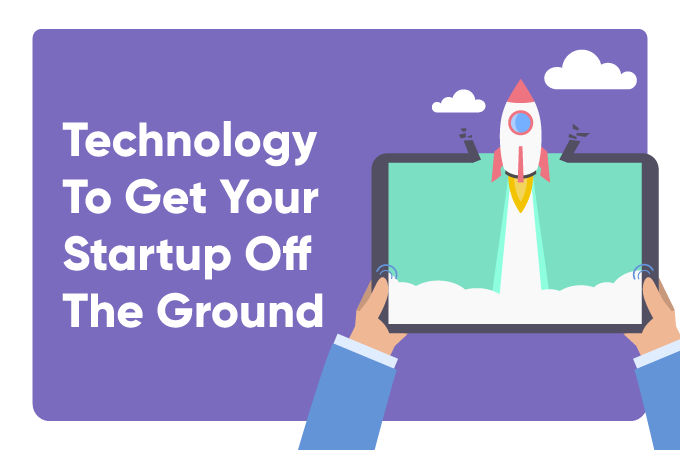 Technology to get your startup off the ground