In this era of uncertainty with COVID-19, much of the world is moving company life from the office to the virtual world. Millions of people are working from home in the United States and elsewhere to maintain “social distancing,” and there’s no telling how long telecommuting will have to last.

But even with employees far out of reach, there may be some good news for companies struggling with COVID-19. We surveyed 1,031 current employees to understand better how company culture can be crafted to maximize morale, productivity, and retention in the workforce.

In the end, we found that remote work does not have to mean a serious drop in productivity; in fact, there are many ways in which companies can keep remote workers engaged and satisfied. Read on to learn more about what remote and in-office workers around the U.S. value in good company culture. Certainly, the results from our survey make strong suggestions for how companies can thrive even in the age of COVID-19. 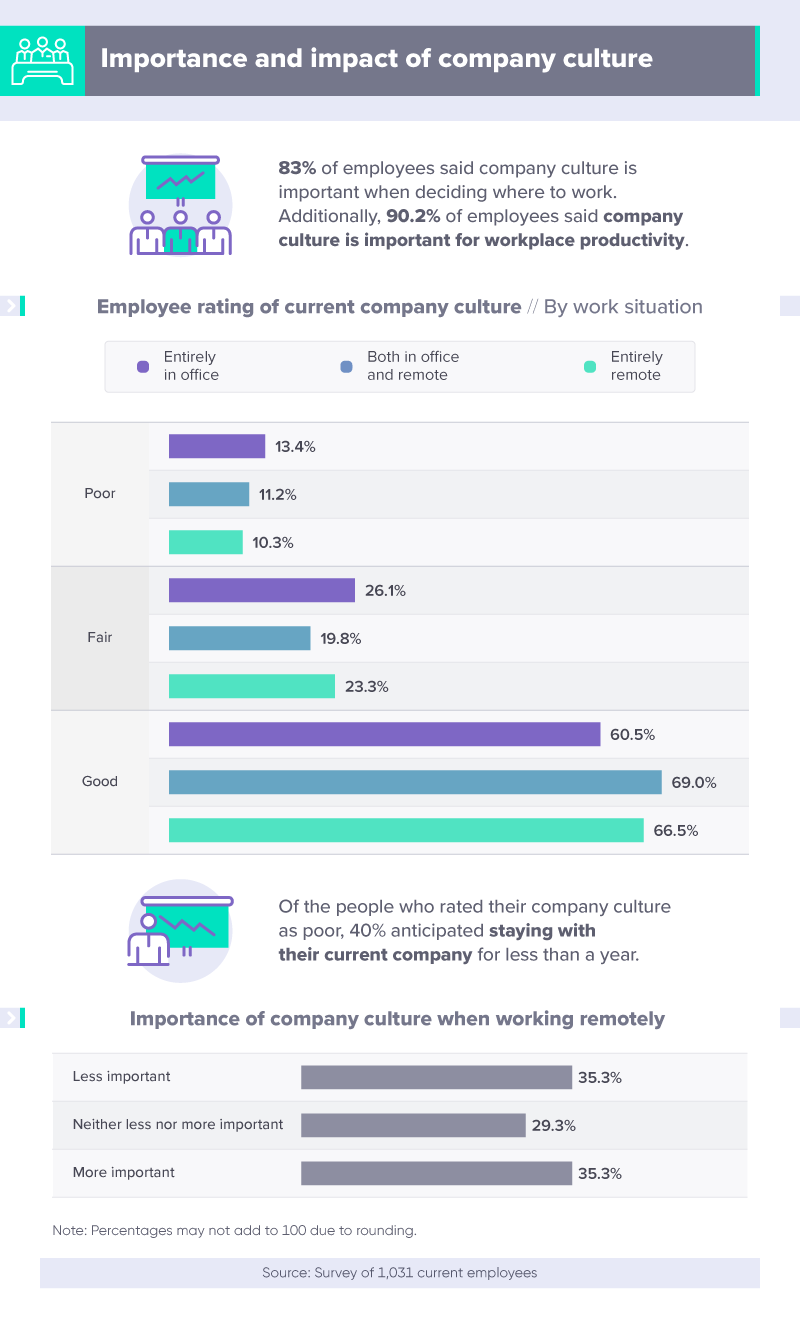 Former Campbell Soup Company CEO Doug Conant once spoke to the importance of company culture by saying, “To win in the marketplace, you must first win in the workplace.” In our survey of more than 1,000 U.S. employees, we also found that to be true: 83% of respondents rated company culture as important when deciding where to work. Even more astounding, the majority of employees surveyed – around 90% – stated that company culture is important for workplace productivity.

However, remote employees were split on whether company culture plays an even bigger role in their satisfaction with work. An equal number of remote workers – 35.3% each – said company culture is “more important” and “less important” because of their telecommuting status. Nevertheless, our findings suggest that work culture is, no doubt, important to employees of all kinds. 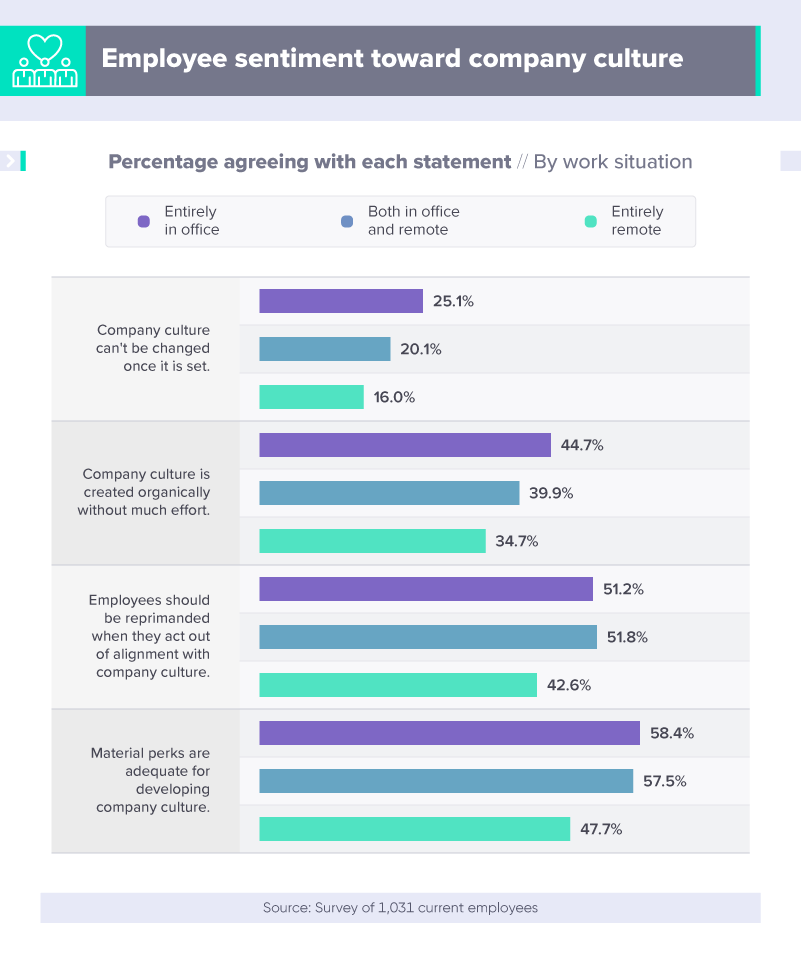 In today’s digitally wired world, it’s common for workers to rate their employers on websites like Glassdoor or to leave reviews for supervisors on their LinkedIn profiles. By no stretch of the imagination is the American workforce complacent about their company culture – and many people have their own ideas for how a company should be run. We asked our survey respondents to share their opinions on how company cultures can be shaped for the better. Our results suggest that the majority of workers believe company culture can change. Only 25.1% of in-office workers and 16% of remote workers argued otherwise. However, survey respondents were more split on how company culture is created: 44.7% of in-office workers, 34.7% of remote employees, and 39.9% of people spending their time split between the office and home (“split-time workers”) agreed with the statement that “company culture is created organically without much effort.”

For managers, the message is clear: Companies most certainly have some kind of culture, whether they mean to cultivate it. Even better, most workers believe this culture can change, too.

The system of “carrot and stick,” or reward and punishment, seems to ring true for survey respondents, as well. Roughly 51% of in-office workers and split-time workers believed companies should reprimand employees when they act out of alignment with company culture, compared to 42.6% of remote workers. Meanwhile, nearly half or more of all workers surveyed said material perks, such as yoga classes, health care add-ons, free snacks, or flexible paid time off, are adequate at developing company culture. Interestingly, in-office workers and split-time employees seemed to value material perks more than remote workers (perhaps because they can’t access certain perks, like free snacks, from home). 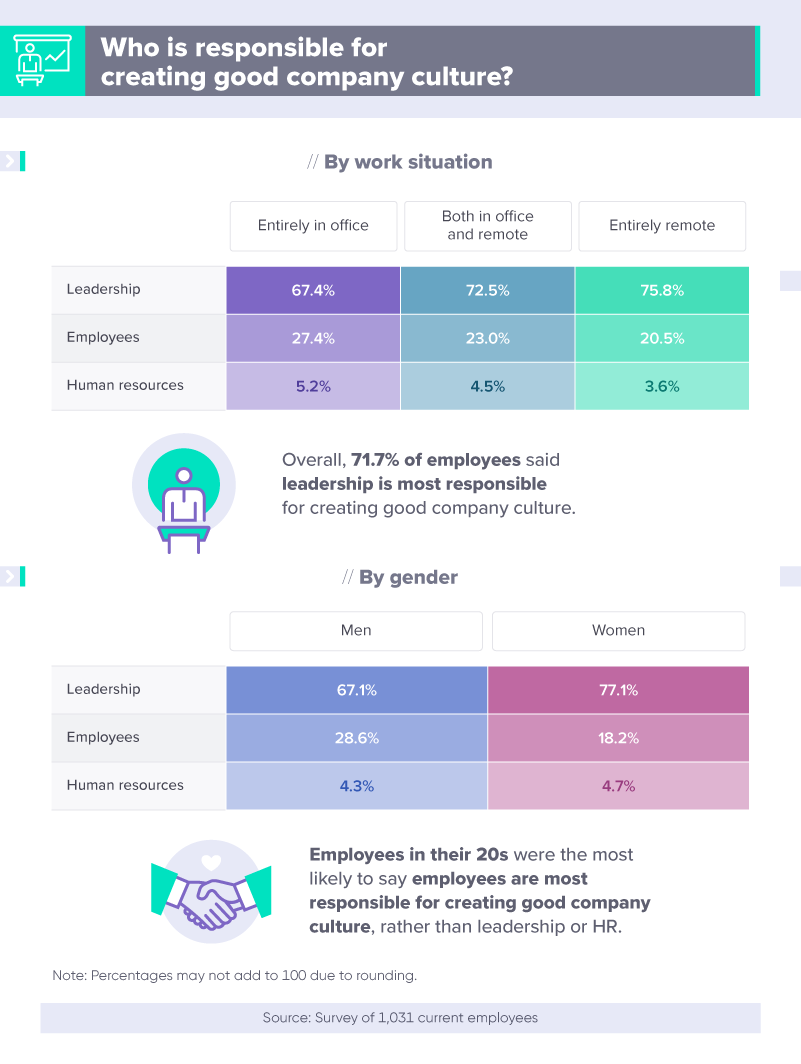 We’ve established that work culture is important to most employees surveyed, but one has to wonder: Who is responsible for cultivating that culture? Is it the responsibility of employees – who may either support or antagonize each other in the workplace – or is it the responsibility of the human resources department, which often mediates internal conflicts? Or is company culture best cultivated by higher-ups, who may be setting the mood for those of lower pay grades?

However, answers varied slightly depending on gender and age. Around 77% of women said that company leadership is responsible for good work culture, for example, while only 67% of men said the same. Meanwhile, employees in their 20s were the most likely to say they and their counterparts (other employees) bear this responsibility. 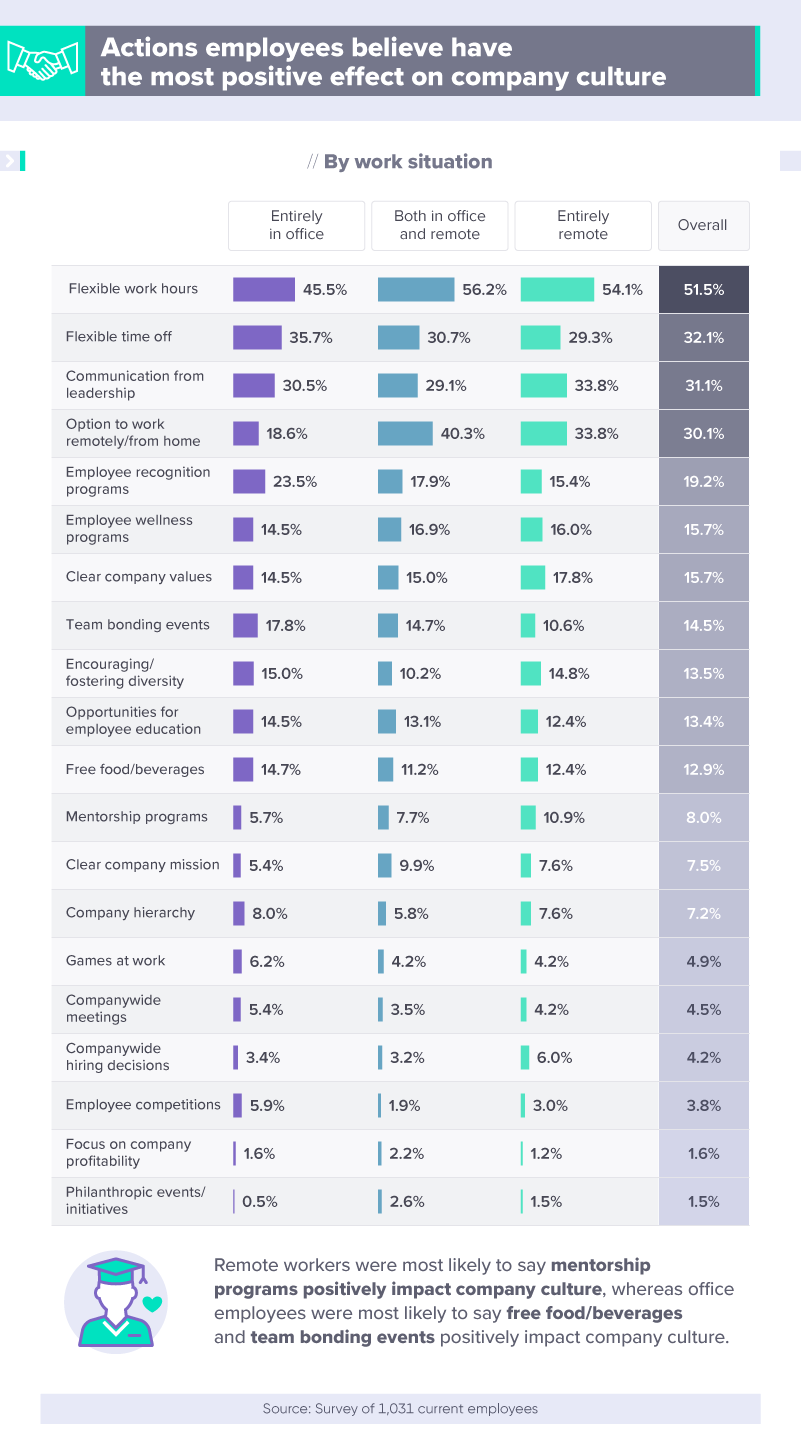 Employers all around the world are competing for a limited pool of talent, and as the Harvard Business Review succinctly puts it, “The right mix of benefits that are both inexpensive and highly sought after among job seekers can give a competitive edge to businesses.”

Mastering that mix, however, is likely the task at hand for most companies, especially as they begin to think about a long-term remote workforce in the era of COVID-19. Employees surveyed were asked to select the three things they believe to positively impact company culture the most. One major and key finding from our survey was that, regardless of whether they were remote, in-office, or split-time employees, most workers valued the same four or five benefits. For example, more than half of all people surveyed said that flexible work hours are important, regardless of their work arrangement. Flexible time off, communication from leadership, the option to work remotely, and programs that recognize employees for their hard work were also rated as having positive impacts.

Nevertheless, remote workers did have slightly different priorities. They were the least likely to value recognition from their employers or team bonding events. However, remote employees were the most likely to say that mentorship programs positively impact company culture. 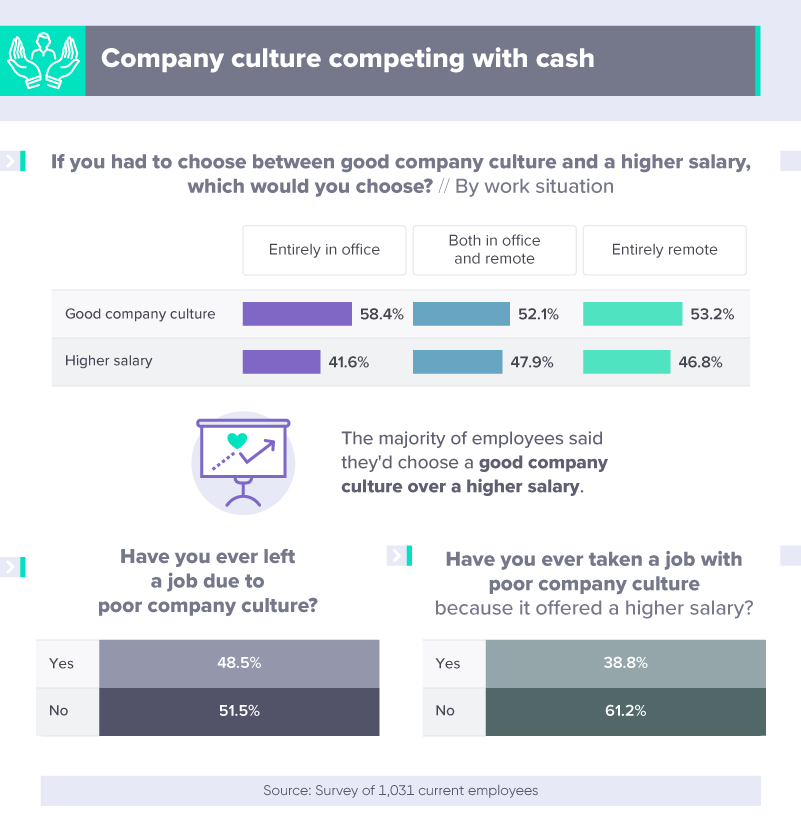 Our survey suggests that “money talks” may not always be true. In reality, more than half of respondents said they’d choose a good company culture over a higher salary, regardless of whether they worked in office or at home. Even so, in-office employees valued a good company culture the most, at 58.4%, compared to remote workers (53.2%) and split-time employees (52.1%).

Our survey also suggests that work culture can be a definitive factor in whether an employee is retained. Nearly half of participants said they had left a company because of poor work culture, while only 38.8% said they had taken a job at a company with poor work culture because it paid more. In other words, employees tend to put a very high value on culture and morale in the workplace, and that means upper management should pay attention to the environment they’re cultivating, both in office and online.

There is no doubt about it: Company culture is extremely important in the workplace, whether that “place” be a brick-and-mortar office or a virtual space like an email inbox or video chat. Even before COVID-19 wreaked havoc on American work routines, 5.2% of Americans – roughly 8 million people – were already working remotely (according to 2017 U.S. census data, the most recent available).

Visit Nulab.com for more information on how you can improve your work culture in the digital age. In a time like this, we are more than eager to work with American companies to keep workplaces productive, positive, and safe from COVID-19.

We surveyed 1,031 current employees about their experiences and opinions regarding company culture. Respondents were 54.5% men and 45.5% women. Additionally, three respondents identified as nonbinary, and one respondent did not disclose their gender. The average age of respondents was 37.2, with a standard deviation of 11.3.

Respondents were given a series of statements about company culture and asked to relate how much they agreed or disagreed with the statements. They were given the following scale of options:

In our final visualization of the data, we condensed these into three broad groups: disagree, neither disagree nor agree, and agree.

All respondents were asked to rate their current company culture. They were given the following options:

In our final visualization of the data, we condensed these into the following broad groups: poor, fair, and good.

Respondents who reported working fully remotely were asked to rate how important company culture is to them as a remote employee. They were given the following scale of options:

Respondents were asked to choose up to three things they thought positively impacted company culture the most.

The data we are presenting rely on self-reporting. There are many issues with self-reported data. These issues include, but are not limited to, selective memory, telescoping, attribution, and exaggeration.

Company culture is important in any business, but it can take time and effort to get it right. If someone you know would benefit from reading this study, you’re free to share it with them for any noncommercial reuse. Please link back here so that they can review the entire project and methodology. This also gives credit to our contributors, who make projects like this possible. 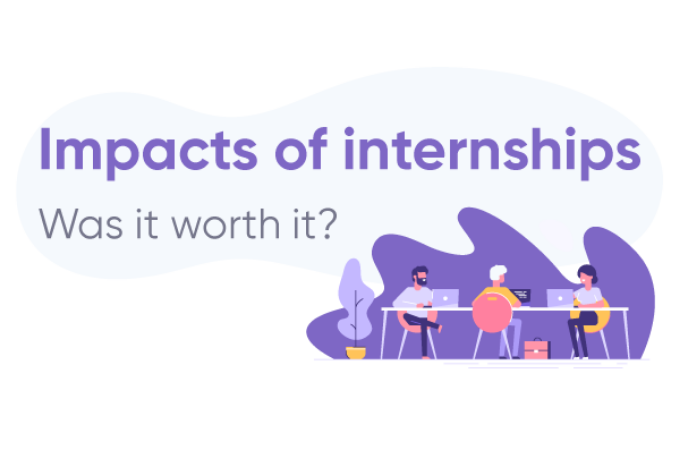 Impacts of internships — Was it worth it?

Reviewing your employer’s response to COVID-19