Internships are truly a mixed bag. Some have landed interns highly coveted jobs, while others have ended in infamous lawsuits. And the outbreak of the coronavirus in March of 2020 may have thrown an entirely new wrench in the situation. What will the long-term consequences be for the world of internships hereafter? And what does an internship really look like in the U.S. today?

We wanted to dive right in, so we surveyed 984 people across the country, most of whom had interned with at least one company before while earning their degree. Others had completed their degrees without interning, which enabled us to compare the success and outlook variances that were most heavily impacted by an internship. Whichever side of the internship fence you happen to stand on, you’ll want to keep reading to see the exact influence they’re having on the American workforce today. 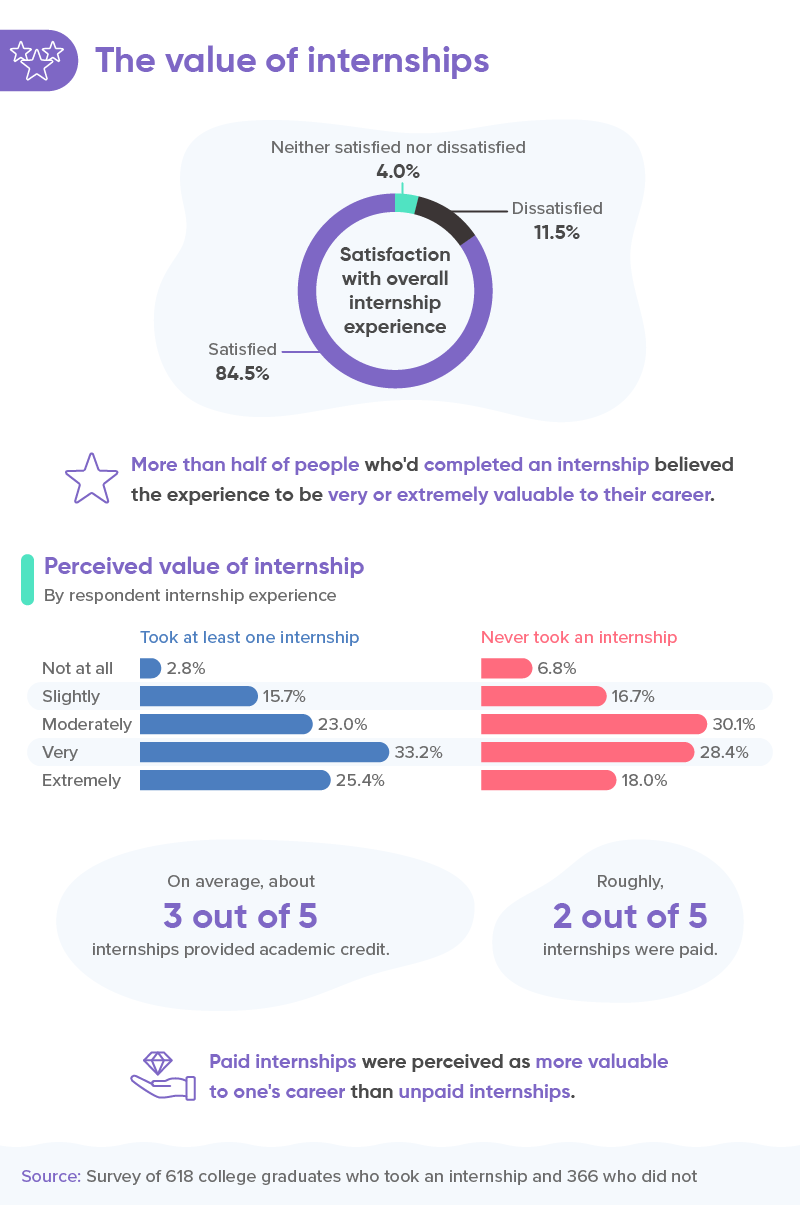 Internships and education often went hand in hand school year after school year, and, on average, people were overall happy with the experience. More than half felt the internship had been incredibly valuable to their career, and 84.5% said they were satisfied with the experience when they looked back. Even though students were more likely to see the value once they had actually interned, the students who hadn’t interned still seemed well aware of their “very” to “extremely” high value.

That said, the impact of an internship may not have been accessible to all respondents or all students. Unpaid internships, though often prestigious, are not always an option for a family who is financially obligated to work for money, as opposed to working for free. Though 3 out of 5 respondents were offered academic credit, only 2 out of every 5 internships were paid. And people with at least one paid internship were more likely to say it was valuable to their careers than those with unpaid internships. 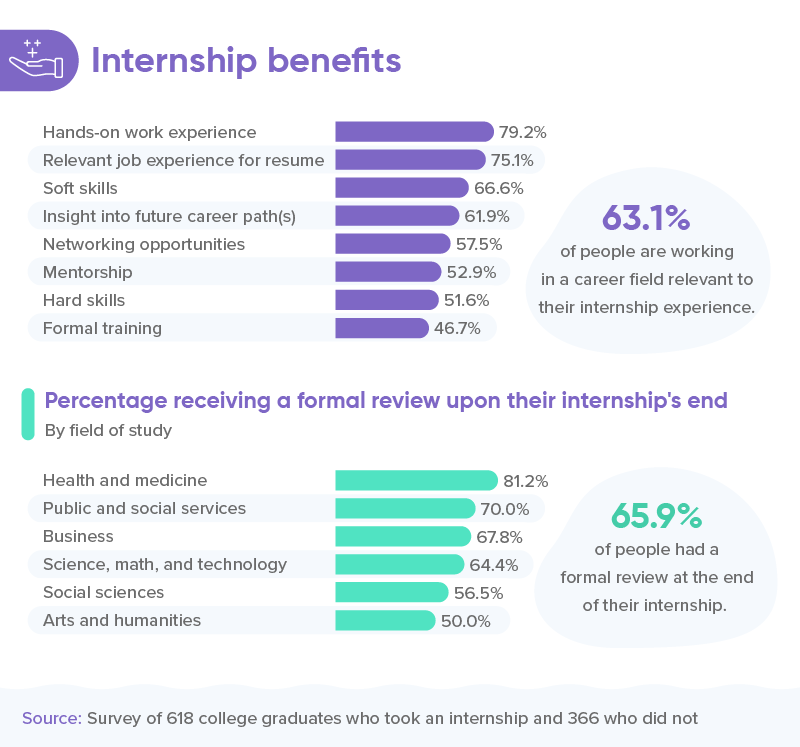 If internships are, in fact, elitist, their regulations deserve a second look, as those who managed to make them work (paid or not) were certainly reporting some serious benefits. Doing much more than getting coffee and making copies, most respondents said their internships gave them hands-on work experience. This type of relevant experience greatly helps a person later obtain full-time work, as lack of experience is an incredibly common reason to turn away an applicant. Job experience that was specifically relevant for their resumes was also a benefit for 75.1% of the interns in our study. Soft skills and networking, benefits noted by 66.6% and 57.5%, respectively, were two other powerful resume boosters.

Insight into a potential career wasn’t the most common benefit (61.9% experienced this perk), but it may have been one of the most helpful. Sixty-three percent of people who interned in a particular field had chosen to stick with that one for life. Health care professionals in particular were interning and subsequently sticking within the field, though becoming a doctor actually requires an internship. 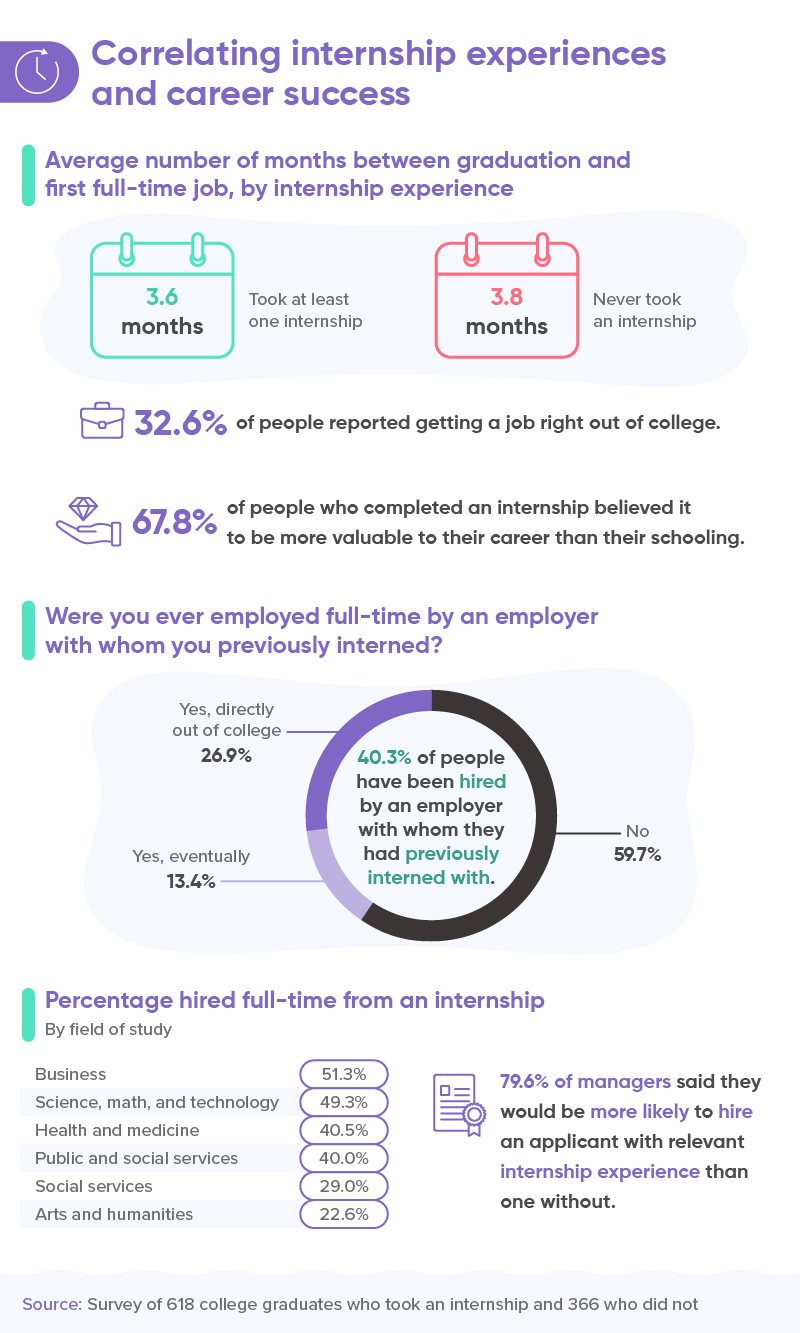 The time that internships minimized between graduation and job attainment might have been the most compelling, clear-cut benefit revealed through this study. On average, it took a full two months longer for college graduate applicants lacking an internship to get a job. This may represent two more months of expenses or added debts, in addition to the lack of an office to go to. And once on the job, those who had interned felt the internship had actually better prepared them for the position than their education had.

From a manager’s perspective, relevant internship experience was highly likely to influence a decision to hire. More than half of respondents who had interned before said a relevant internship would make them “very or extremely likely” to hire the candidate. Even after months and years have passed, some experts recommend leaving relevant internships on your resume for up to ten years. 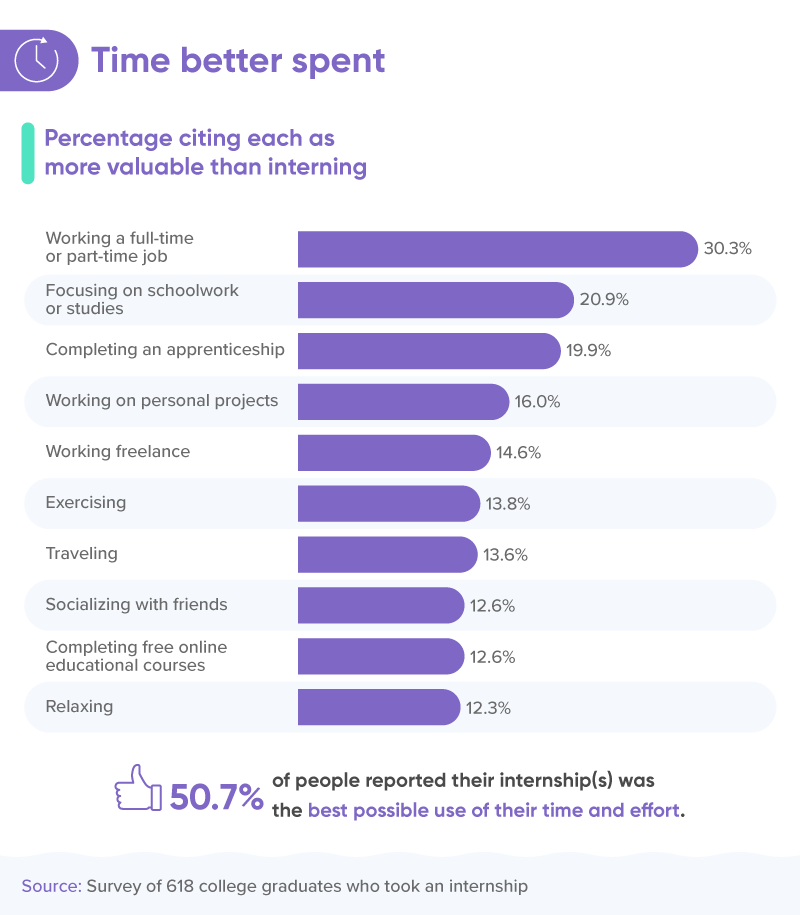 Our study also took a look at the other angle: In hindsight, would those who interned have chosen to spend their time another way? A third said a full-time or part-time job would have been more worthwhile, while 20.9% said they regretted not using the time to devote to school. But ultimately, just over half of people agreed that their internship was the best possible use of their time. Considering some of the benefits interns reported to have received from their experience, it’s not too hard to see why.

The data behind this study revealed some pretty compelling perks to internships: They caused hiring managers to take applicants more seriously, to help students feel more prepared on the job, and there’s often payment and school credits involved for some.

From an employer’s perspective, an internship is a relatively easy and potentially highly helpful opportunity to introduce into your company. Whether you’re an intern or a seasoned employee, having the right collaboration tools will help you get ahead. Nulab gives businesses seamless access to modern communication, helping internships, employers, leaders, and teammates thrive together. Head to Nulab today to find out how.

Twenty-four percent of respondents were actively working in a career field related to business, 23% in science, math, and technology, 13% in arts and humanities, 12% in health and medicine, 9% in social sciences, 7% in public and social services, and 12% in other fields.

It is possible that with more respondents from each demographic, we may have been able to gain better insight. The findings on this page rely on self-reporting and, as such, are susceptible to exaggeration or selective memory.

The choice of interning or even gearing up for an already decided upon position can be made more clearly with the help of a little information. If you know someone who would benefit from the data behind this article, you’re welcome to share its contents. Just be sure your purposes are noncommercial and that you link back to this page. 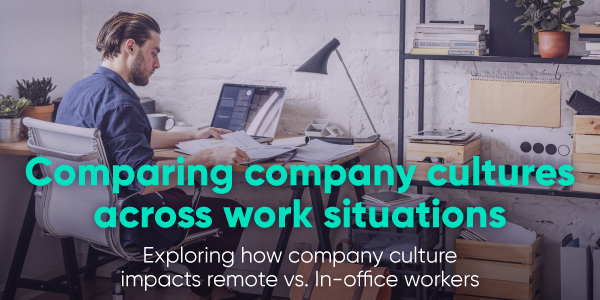 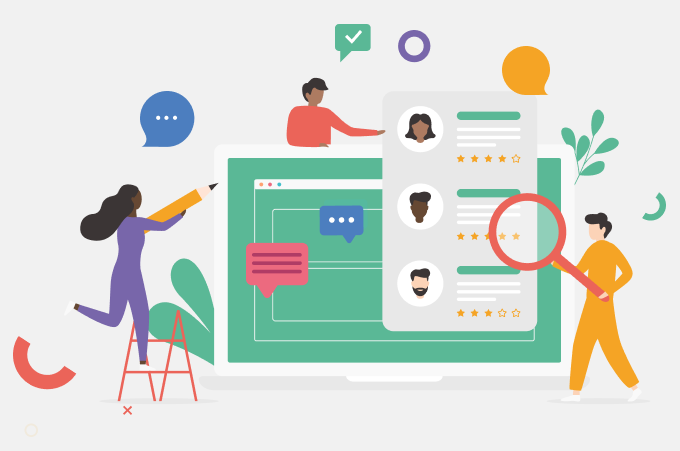