Your team just finished another project! While it’s tempting to celebrate the success and move on to the next agenda item, there are three questions your team should be asking themselves before switching gears. What went well? What went wrong? Is there something new we should try? These questions represent a simplified version of a retrospective that’s growing in popularity — the Keep, Problem, Try retrospective (or KPT).

First developed by the Japanese company Toyota, KPT has spread in the professional world in recent years. By following this process at the end of your team’s projects, you should be able to efficiently identify and fix any problems you encounter and make the next project even smoother.

Follow along to get started with the KPT Cacoo template, or break out the sticky notes and find an empty wall to make the most of your team’s retrospectives. 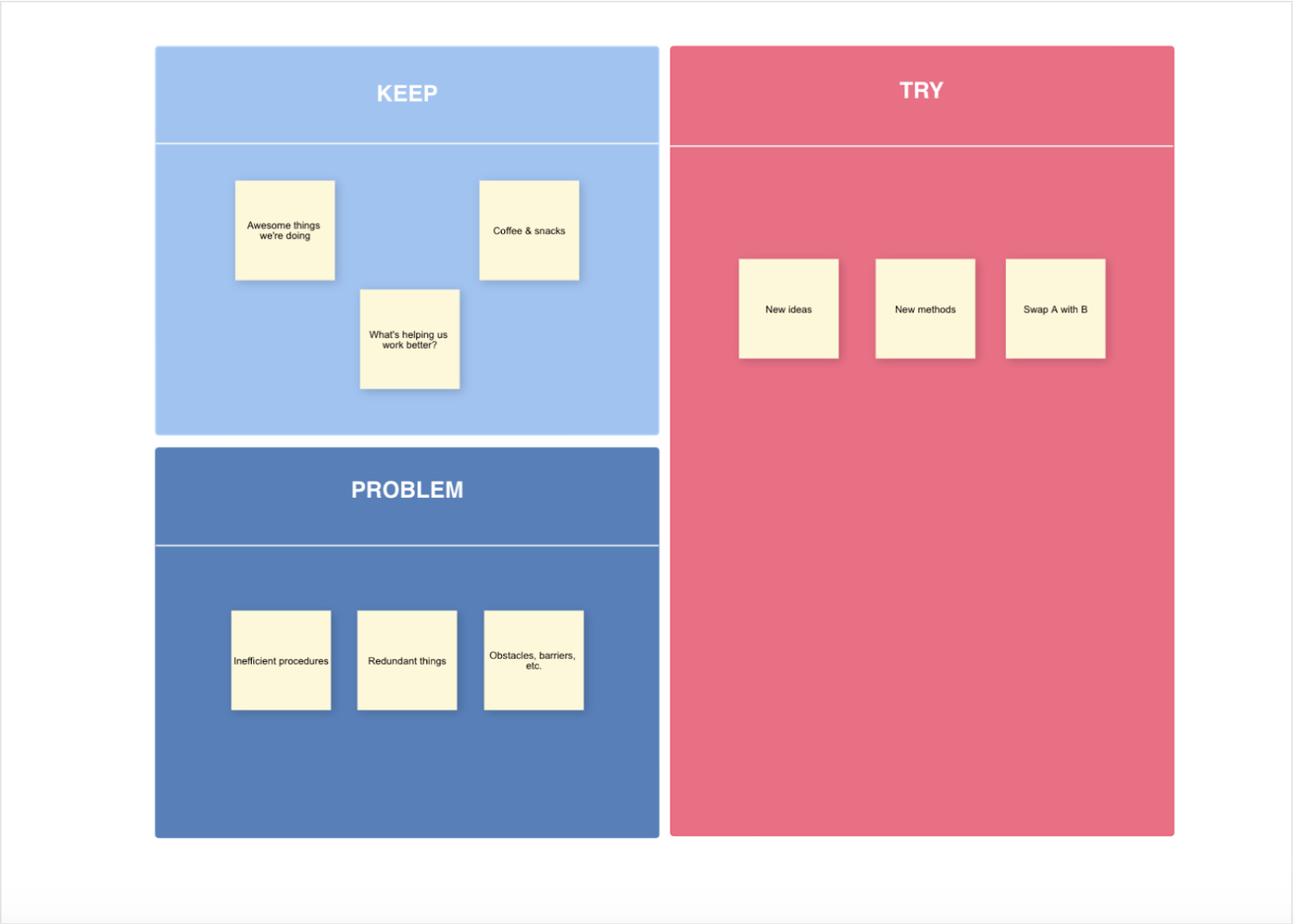 What do we keep?

The first step of the KPT process is to identify what went well with the project. Start off with the positives. These are things you want to make sure that the team continues to do on every project in the future.

Take some time to make the full list. Many things that fall under the “keep” category may be so obvious you don’t think to write it down. That part of the process that always worked so well you don’t even think of there being another way? That’s worth writing down. You’ve found a fundamental “keep” for all of your projects.

If you’re really struggling to come up with things for the “keep” section, this could signal a bigger problem. Maybe your process is hitting so many snags that problems stick out far more than the positives. Or, perhaps, your team isn’t paying enough attention to the process and each other’s contributions to come up with specifics.

Definitely don’t cut this part of the retrospective short — give everyone enough time to really think about the whole project and compare it to past work. Once you’ve accomplished this step as a team, it’s time to move on.

What problems did we have?

Sticking to a team level and not focusing on any individuals, the team should brainstorm all the problems they encountered in the project. No matter how big or small, each one could be an opportunity for improvement for the next project you’ll tackle together.

Think through each step of subtasks of the project to make sure you don’t miss anything. Once you’ve listed all the team’s difficulties, assign a member to brainstorm, research, and pay particular attention to that problem or aspect of the project on the next job. By having one team member pay special attention to that one thing, it won’t be forgotten or overlooked when the team encounters it again.

After having some time to do research, that team member will be able to share their findings and any possible solutions they’ve found if your team hits that same snag again. At this point in the process, you could even come together as a team again to brainstorm communally and come up with as many different answers as possible.

After you’ve identified and assigned all the problems, the team can move on to the last step.

Is there something new we could try?

No ideas are off the table. If someone has had an idea of something that might speed up the process, something that they thought of along the way, or a solution to one of the problems raised in the last step — write it down!

It’s best to foster a very open environment when creating your list of new things to try. It’s highly possible team members have had ideas for a while but never knew when or how to suggest them. This is everyone’s opportunity!

Moving forward with the next project, make sure you take time to discuss and implement these new ideas into the process to see how they work out. Even if they end up not being the best addition, the team is still learning together. Maybe something similar could work, or that idea would be best implemented elsewhere instead. If not, you now know something that doesn’t work, which could be just as valuable.

Each experiment is a chance to learn more about the team as a whole and what will and won’t work in the future.

Why you shouldn’t skip the Keep, Problem, Try retrospective

Not everyone feels the need to do a retrospective after every project, especially ones that went well. However, you can always keep improving a process, and a project’s end is a natural stopping point where everyone has time to reflect. Here’s why you shouldn’t skip it.

It may be easier to grab a conference room and have a KPT retrospective in person. However, we believe this process should be just as accessible remotely. Using pre-made Cacoo templates, your whole team can go through this entire process no matter where everyone is.

With Cacoo, your team can make, comment on, and edit sticky notes in real-time. Set up a meeting and have each team member log in — you might be surprised how smoothly the meeting still runs. Everyone still gets a say, just like you’re all in a room together. We like to think it’s the next best thing. (Don’t worry, the Cacoo template is just as useful if you are in the same room together!)

Adding the Keep, Problem, Try retrospective to your team’s plan could help to greatly improve the next project. While it isn’t the only retrospective or post-mortem that exists, it’s very popular for a reason.

If, after a few run-throughs, you think this process isn’t going to be the best fit for your team or just want to try something different, Cacoo offers a number of retrospectives and templates to help you make the most of each project. You can also find a quick guide to six types of retrospectives to learn more and help decide which option will be right for your team.

Finish your next project with the Keep, Problem, Try method and see what your team comes up with. You might be surprised by how efficient it is!

This post was originally published on August 6, 2020, and updated most recently on February 9, 2022.

Try a Starfish Retrospective to make your projects run smoothly